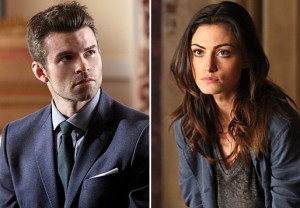 Will Monday’s midseason finale of The Originals (The CW, 8/7c) end in a royal wedding for Hayley? Crippling heartbreak for Elijah? Literal death for Cami? All of the above?

Fortunately, executive producer Michael Narducci is here to answer TVLine’s burning questions about Monday’s episode, including how Rebekah will handle her major life decision the final hour of 2014.

HERE COMES THE HY-BRIDE | “If Hayley goes through with this arranged marriage [to Jackson], she’ll finally be able to really help her people, and she’ll be kind of a queen to them,” Narducci tells TVLine. “And she does trust Jackson. She feels a kinship towards him and, I’d say, even an attraction.” Refreshing our memories, he adds, “Since the very first episode of the show — going back to Vampire Diaries Episode 420 — we knew that Hayley was going to New Orleans to find her people.”

THE END OF HAYLIJAH? | “While it might not be the worst thing in the world to marry someone as handsome as Nathan Parsons and become queen of the Louisiana werewolves, that would mean she’d also have to find some closure in regards to her feelings for Elijah,” Narducci notes. “The very first thing she needs to do is come face-to-face with Elijah and be honest with him about everything that’s going on. There’s a huge scene in the midseason finale where that happens.”

ALL FOR ONE | “Cami’s been prepared to be a vessel for Rebekah; that would mean, effectively, Cami would die,” Narducci explains. “No one wants to lose Cami, so they’re going to have to stop Esther, and now they have a ticking clock.” And it turns out Cami’s peril is just what the gang needs to come together for a common cause: “All of our heroes are now truly motivated to find a way to take down Esther. Cami is also trying to find a way to save herself, which leads her to a confrontation with Finn, the very guy she helped take down in Episode 7. Through this interaction, you find out why Finn is the way he is and why he believes he‘s the hero of this story.”

REBEKAH’S CHOICE | “It was wonderful for Rebekah to raise this baby, but she knows it’s not hers, and she knows she’ll never have children of her own,” Narducci says. “This leads her to really think about her existence as a vampire, as an immortal.” As for Rebekah’s charge? “We’re going to have to make some pretty difficult decisions about what to do with Hope in order to make sure she’s safe.”

How do you hope the year ends for the Originals gang? Would you be OK with a Hayley/Jackson wedding? Should Rebekah give up her vampirism? Drop a comment with your thoughts below.