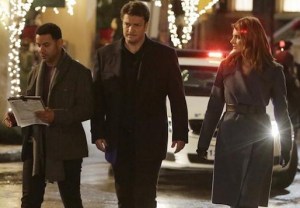 The following contains spoilers from the Castle winter finale.

The midseason finale of ABC’s Castle found Kate crafting for her husband a sweet and poetic Christmas gift, while all the NYPD left in the novelist’s stocking was a huge lump of coal.

In short: While investigating the case of whacked mob doctor, Rick suddenly found himself bound by an omertà blood oath, with crime boss Dino Scarpella. And though the “bond” indeed afforded Rick the access he needed to talk to the right underworld figures about the murder, it ultimately cost him his association with the NYPD, when the dirty organized crime unit detective he helped put away wound up sleeping with the fishes.

Elsewhere in the episode: Per Rick’s family tradition, an anxious Kate ultimately came through with her six-line poem about the year-gone-by (reprinted at bottom), while Lanie and Espo’s brief turn as “fiancee/fiance” led to some reflection of their own — resulting in the surprising, mutual realization that their romance is not a grand one worthy of either of them, so they called it quits.

TVLINE | Hasn’t poor Rick Castle been through enough…?
Well…. You know, there are always new challenges facing Richard Castle. This is just one of them.

TVLINE | Since logic would suggest this is but a temporary setback — I would think he’ll ultimately return to the 12th — what will he be up to in the meantime?
He’s going to pursue the private investigator angle, and part of that is driven by his desire to work with Beckett, even though he is no longer officially able to do so. He will follow that to its natural conclusion.

TVLINE | Might he use any of this down time to poke further into his own vanishing?
I think that in light of the fact that he is just starting out as a private investigator, he’ll be mainly focused on [his new job].

TVLINE | When is the next beat in the vanishing storyline?
It’s probably something we’ll touch on in the two-parter, which is currently slated for Episodes 14 and 15, which I think will air in February.

TVLINE | Anything else to share about the two-parter?
It’s a little “early days” at this point, but it will deal with show mythology — though not necessarily directly connected or delving deeply into the disappearance.

TVLINE | Turning to Lanie and Esposito: You really zagged when I thought you were going to zig. Did you feel that relationship had become too pat, or that things were almost incestuous at the 12th?
Look, they’ve had an on-again, off-again thing for a while. And it’s good for our show when not everybody is settled down, so we wanted to be able to keep them a bit footloose and fancy-free.

TVLINE | What can you tell me about the first episode back in the new year?
Castle will be getting involved in an investigation that Beckett is also involved with, and he will attempt to run a parallel track with her — and of course it will not go entirely smoothly, especially since this is his first case ever as a private investigator.

TVLINE | Any fun themes to any upcoming cases?
Shortly thereafter, in Episode 12, is a case that takes us into the world of a telenovela….

TVLINE | Yeah, I had suggested to Nathan [Fillion] on Twitter that he should get his buddy Kamar de los Reyes, from One Life to Live, for that.
Uh, funny you should say that — Kamar is in that episode. [Laughs]

KATE’S POEM FOR RICK
This has been an epic year
Life’s been full of joy and tears.
Solving crimes and catching killers,
Just like Castle’s famous thrillers.
We share a passion every day,
As partners go we are here to stay.

What did you think of the winter finale “Bad Santa”?