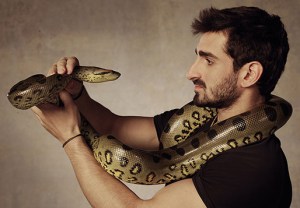 Did you hear the one about the guy who willingly fed himself to an anaconda?

No, that’s not the set-up to a really questionable joke; noted naturalist Paul Rosolie literally served himself to an anaconda during Sunday’s appropriately titled Discovery special Eaten Alive — or, at least, he intended to.

Anticipation for the two-hour event had been building ever since the network announced it in November, but not everyone’s rally cries were of support. The most notable pushback came, unsurprisingly, from PETA (People for the Ethical Treatment of Animals), which chastised the entire affair as an act of abuse.

It certainly helped Rosolie’s defense that the whole stunt was designed to promote rainforest preservation. He recently told People, “I wanted to try to do something that would shock people and get a lot of attention and to start a conversation on a bigger stage than it is right now. We have to organize and get smart about it. It’s a massive issue, but it’s easy for it to be out of sight, out of mind.”

Unlike Discovery’s last major event — daredevil Nik Wallenda tight-rope walked (while blindfolded!) across two Chicago skyscrapers — Rosolie’s reptilian encounter was pre-taped, though Discovery was able to keep the real surprise a secret: Rosolie tapped out at the last minute! The constriction proved to be too much for him, so he cut the stunt short.

Given that it didn’t work out exactly as teased, was Eaten Alive worth all the hype? Grade Rosolie’s big stunt below, then drop a comment with your full review.