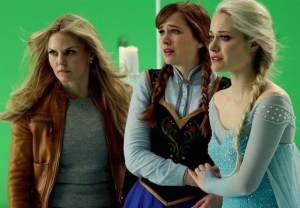 This week on Once Upon a Time, the people of Storybrooke waged (oft-amusing) war upon one another, while in flashback we learned just how close Emma and Ingrid had been.

IN FLASHBACKS…. | Upon her arrival in our realm, Boston circa 1982, the Snow Queen mistakes a storefront psychic (Hi, Rebecca Wisocky!) for a legit seer and asks the whereabouts of a “girl not born yet,” When the psychic “sees” someone named “Susan,” well, the jig is up, and some 17 years later Ingrid has found Emma herself, as a foster mother. Ingrid protects Emma from the house bully and effuses about the “extraordinary gifts” the young girl will one day surprise people with. Emma basks in this familial love, and as such is joyed when Ingrid admits her plan to adopt her! Alas, Ingrid then goes a step too far and goads Emma into using her powers to stop a car from mowing her down. Emma subsequently freaks out, devastated that the one person willing to adopt her was “a nut job.” After Emma runs off, we fast-forward to Storybrooke circa 2001 and Ingrid’s arrival there, led by the apprentice’s scroll.  It takes a decade, but Emma finally shows up in her ice cream shop — and immediately wigs out that her nutty foster mom has been “waiting” there for her. When Emma is further spooked by the talk of magic and what not, Ingrid pulls Emma’s memories of their past from her bean, and embeds them in a crystal.

IN STORYBROOKE…. | As the Spell of Shattered Sight takes effect, the choice words come flying from everyone’s mouth. Charming and Snow dis one another’s worthiness as royals (and dig up some dirty Dr. Whale laundry). Kristoff wonders to Anna is his haircut wasn’t the only bad idea he’s had. And the Evil Queen… well, she’s aghast to see herself in a pantsuit.

Emma and Elsa deduce that the only way to end the curse is by destroying the Snow Queen, but their “sisterly” ribbons (and the love channeling through them) prohibits that. Luckily, Emma gets the idea to counteract that “love” with good ol’ hate, and that means antagonizing Regina. Emma breaks through the seal on Regina’s vault and — after taking in her full-on evil appearance — taunts her frenemy with the notion that she purposely brought Marian to Storybrooke to bust up Regina’s romance while rubbing in her nose her own happiness with Hook. The Evil Queen licks her lips at the chance to take down Swan once and for all, but the girls instead use her first hate-filled fireball to dissolve their ribbons. Emma then zaps Regina away, and then they run! Smart.

While the Evil Queen engages in a battle of swords and words with Snow White at the cop shop — all the while never waking baby Neal, whew — Emma and Elsa confront the Snow Queen, yet still aren’t able to hurt her. That’s because, Ingrid explains, they still feel some love from her, born of the “good” memories she took from each of them and saved in two crystals. Their stand-off is interrupted by Anna, who after being poofed away to the beach by Regina discovered the message in a bottle, from her and Elsa’s mother. The note — quite detailed and neatly printed, considering the ship was tossing, turning, sinking — explains everything to Gerda’s daughters, about the sister who had ice magic, as well as another one she made Arendelle forget all about. Gerda regretted that decision and implores her daughters to retrieve Ingrid from the urn and restore Arendelle’s memories (with a handy enclosed crystal), so that they may know her again.

Ingrid at first is not entirely melted by the words, but once they sink in, she realizes the error of her ways. “I am a monster,” she says, “not because of my powers but because of what I let them turn me into.” And as emotional swells of Titanic-like music amp up, Ingrid undoes the curse, even at her own mortal peril, and reassures Emma that she did get her own happy ending: “All I wanted was to have my sisters’ love — and now I do. Now I get to join them.”

As a festive snowfall washes away the spell, Regina and Mary Margaret have a huge ol’ laugh at what they apparently got wrapped up in, while Elsa and Anna agree they will follow through on their mother’s wishes and return to Arendelle with the lost memories of Ingrid (and, you know, Helga). Yet while Snow Queen’s plan failed, Rumplestiltskin insists that his will not. That even though Hook failed in his assigned to kidnap a child (“Perhaps you could say my heart wasn’t in it”), he will leave Storybrooke behind — and none the worse for the wear, at Hook’s “dying” wish. But he can’t promise that “the rest of the world” won’t bother the Maine burg.

NOTABLE QUOTABLES
* “He’s a baby, not a burrito.” (Full disclosure: I used to hear that same criticism.)
* “I killed the Evil Queen’s mommy and I said I’m sorry. And I didn’t mean it. Still wanna hold hands sing  ‘Zip-a-Dee-Doo-Dah’?”
* Ha, Young Emma plucked a stuffed dalmatian at the arcade game.
* “Whoa, little late for Halloween. How do you walk in that thing?”
* “I had come here to kill Emma, but now I get to kill the two idiots who started it all.”
* “Your ribbons? What have you done?” “I’m not much for accessories.”
* “You think this spell has made me angry? Do not wake my baby!”
* “You said you could keep a secret!” “I… was… 10!”
* “I love you! You’re amazing! … You’re unconscious.”

What did you think of “Shattered Sight”?