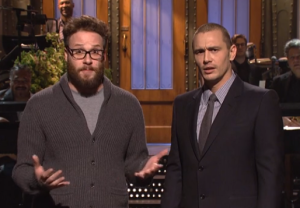 Anyone else feel like Saturday Night Live needs to work harder on its cold open/opening monologue combos?

I wonder how many folks tuned out after this week’s dismal one-two punch — a laugh-free and utterly toothless look at the Eric Garner grand jury decision and a James Franco intro that felt like an afterthought — and wound up missing several solid sketches (and a few incredibly weird ones) in the subsequent hour.

Below, my picks for the week’s best and worst.

BEST: PETER PAN LIVE!
As mentioned above, Franco’s take on Walken was a highlight, but so too was Aidy Bryant’s gutter-y Tonkerbell (ready to kill a hummingbird and land on some raw meet) and Cecily Strong’s Allison Williams-playing-a-very-womanly-Pan. Hat tip to the show’s writing staff for reacting quickly to a major pop-cultural event from just two nights prior.

BEST: JINGLE BALLERZ
A random but quite funny spoof of the nativity through the eyes of MTV. Pete Davidson’s KaTyler Smith (host of Drunk or High) introduced a collection of hip-hop and R&B stars reenacting the birth of the baby Jesus. Sasheer Zamata’s Rihanna, Taran Killam’s Eminem and Kate McKinnon’s razor-sharp Bieber were my favorites, and even Nicki Minaj scored a few laughs with her “flawless” Beyoncé.

HONORABLE MENTION: LESLIE JONES ON “WEEKEND UPDATE”
The most recent addition to the SNL cast did a bit about dating web sites for marijuana lovers — which quickly devolved into a very weird but intermittently hilarious screed about a bad experience with mushrooms, topped off with this bit of ridiculousness: “Have you ever been called a bitch by Harriet Tubman?”

WORST: POLITICS NATION
Kenan Thompson really needs to make sure the audience is laughing before he begins cracking himself up as MSNBC host Al Sharpton, no? If this is the best SNL can do with hot button issues of race and law enforcement in America, maybe it should stick to less incendiary material.

What did you think of Franco’s SNL episode? Grade it in our poll below, then sound off in the comments!