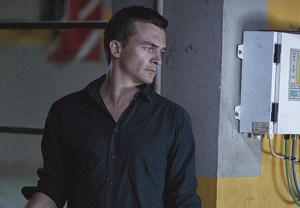 This week on Showtime’s Homeland, with the embassy under siege, Peter Quinn swung into action, near-Die Hard-style, while Carrie and Saul’s ride back from the hostage exchange continued to be wild.

With Martha having realized that the embassy is being infiltrated by Haqqani and his men, Quinn quickly tries to recall some the Marines who had been sent to the site of the attack on Carrie and Saul’s caravan. But until then, it’s him and a couple of Marines versus about a dozen baddies.

Meanwhile, Carrie and Saul survived the bombing, though others weren’t as lucky. Carrie calls Aasan Kahn to request backup from his troops, but Talseem “advises” him to hold off on doing so for 10 minutes, if only because the Americans have had their way on their soil for so long. (All told, she has little regard for Aasan, the man who keeps insisting “our enemy is our friend.”) At one point, Carrie is called upon to help out by laying down some suppressive fire, so that the Marines can get a bead on a sniper, but she goes Full Rambo, scaring the gunman away.

As the CIA follows “burn” protocol, Lockhart finds himself in custody of the “crown jewels” aka an exhaustively assembled database of all assets in the region that Sandy never trusted to back up onto a D.C. server. He gets it to “the vault,” a safe room within the embassy where Martha and others are gathered, but Haqqani soon enough comes knocking, executing a hostage for each moment that they delay in opening the door/turning over the file. Quinn and a Marine meanwhile pick off a couple baddies, then cop a radio to get wise to their game plan. Back in the vault, Lockhart shoves Martha side to turn himself and the list over — and as he does so, Haqqani guts one last hostage, Fara. At that point, Quinn and the Marine open fire, taking out all but Haqqani himself (who nonetheless took a bullet) and two others.

In the aftermath, Quinn “questions” Saul about anything he might remember from his captivity that could lead them to injured Haqqani, until Carrie eventually has to intervene. Martha meanwhile visits husband Dennis, who — knowing that everyone has been ordered to “bug out” the next morning and return to the States — asks her for her belt. As he sees it, if he takes his life and spares her further disgrace, there’s the chance this black mark will be swept under the rug. She hesitates, then seems to consent, but notes: “It can’t be my belt” that he uses. She fetches his from a locker and throws at it him, with plenty of disgust at his “selfless” but cowardly way out. (Come morning, we see that Dennis didn’t follow through and indeed will go back to the USA to pay the piper.)

Also come morning, Quinn is MIA — because the night before, he craftily duped an enemy tail and eventually commandeered their vehicle, abducting the driver. Having already pinched one burner phone from a guy he killed inside the embassy, Quinn finds an identical one on his hostage, and seems to form an idea/plan. With him a no-show for the first transport out, Carrie beseeches Lockhart to let her stay behind five days to see what’s what. Lockhart begrudgingly agrees — the government no longer wants her representing their interests there, especially with diplomatic ties formally cut — and warns that neither she nor Quinn will have official cover.

Saul points out to Carrie, “There comes a point where you’re no longer responsible,” but she says she’s not there yet. He then notes that POTUS is readying the troops for even worse fallout, and warns her to be careful. “I will,” she says.

What did you think of “13 Hours in Islamabad”?