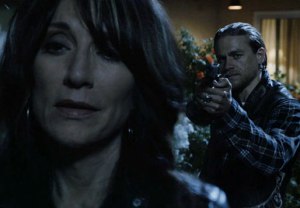 Lucky for Sons of Anarchy viewers, that’s exactly the kind of performance Katey Sagal turned in this week, during her final act as SAMCRO’s stoic matriarch.

Gemma started the episode the way she always does: with her walls up. When she encountered truck driver Milo — played by Michael Chiklis, whose time on screen was all too short — Gemma was defensive and guarded. “Well, that’s good. ‘Cause I ain’t offerin,” she fired back after Milo said he wouldn’t be in need of oral sex on their road trip together. This Gemma — spunky and full of one-liners — was the Gemma we know.

Later, though, Sagal brought her character into more unfamiliar territory, as she paid her Alzheimer’s-afflicted father (a heartbreaking Hal Holbrook) one last visit. From the moment Gemma uttered the words, “Hi, Daddy,” we saw a troubled woman finally coming to terms with her many, many sins.

“I just want to say I’m sorry for all the trouble I caused you,’ Gemma cried to her ailing dad. “I know I hurt you and Mommy a lot. Disappointed you. I embarrassed you.” Although we’d seen glimpses of a regretful Gemma throughout the season — speaking with Tara’s spirit, apologizing to her grandson, Thomas — Sagal had kept her character’s emotions in check in the previous 12 weeks. In that honest and emotional moment, she finally revealed to us the remorseful woman underneath all that leather.

Finally, after Gemma unloaded her emotional baggage with her father, Sagal exuded a sense of serenity as she braced for Gemma’s own son to kill her — a full-bodied peace that we haven’t seen in Gemma in a long time, perhaps in the history of the series.

Those of us watching at home knew it was the right thing for Jax to do — Gemma herself acknowledged that when she said, “It’s who we are, sweetheart” — but Sagal’s stunning performance throughout the hour made us question, for the first time, if Gemma truly deserved this irreversible punishment. 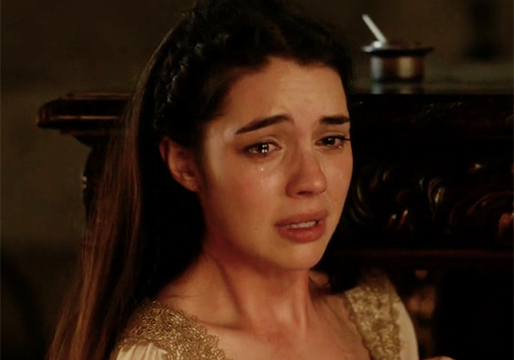 HONORABLE MENTION | From the moment Reign‘s second season began, Mary’s world has been crumbling around her. Between the arrival of the plague and the rise of religious conflict, her sense of security within the palace walls has been gradually diminishing — and on Thursday’s episode, a violent rape shattered that security completely. Not only did Adelaide Kane project a haunting vulnerability in the aftermath of the attack, but her subsequent display of strength — as Catherine noted, Mary needed to provide comfort to her people — was nothing short of inspiring. Many criticize rape as a cheap plot device on TV shows, but the depth Kane brought to her depiction of a victim on the rise justified the attack’s inclusion, difficult to watch as it may have been. Neither Mary, nor Reign, will ever be the same. 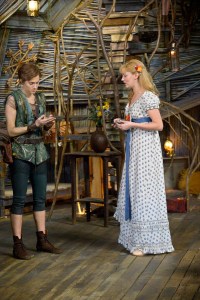 HONORABLE MENTION | She may not have had the bold-faced billing of Allison Williams or Christopher Walken, but Peter Pan Live!‘s Taylor Louderman stole several of the musical’s big scenes with a combination of wide-eyed enthusiasm and girlish romanticism. The palpable joy she brought to the night’s first big number, “I’m Flying,” made it easy to suspend disbelief and get lost in the magic (even if we could see the wires hoisting her skyward). And while playing the Darling’s eldest daughter Wendy is a fairly complicated task, the young actress nailed the sometimes conflicting goals of mothering Peter Pan and his Lost Boys, while also pining away for the titular scamp. Regardless of your feelings about the overall production, it’s hard to deny Louderman’s got a bright future in front of her.

Which performers rocked your TV screens this week? Sound off in the comments!