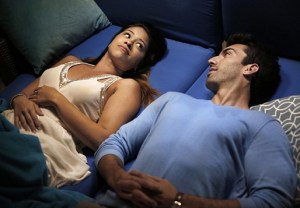 On Monday’s Jane the Virgin (The CW, 9/8c), Rafael will learn, during a very awkward dinner-date convo, that his baby mama-turned-girlfriend has never done the deed… and isn’t planning to.

“I would say, like for anybody that’s talking about their sexuality with a partner, it’s very uncomfortable,” star Gina Rodriguez previews. “At times, it felt judgmental. You’re going to see [Jane] never second-guess her decision, but have to fight for her decision.”

If that makes it sound like Rafael isn’t initially supportive of Jane’s choice, portrayer Justin Baldoni assures that while the revelation is “a shock” for his character, he hasn’t forgotten the lessons that having cancer taught him.

“One of the things that happens is you might… be selfish or think for yourself for a moment and make a bad decision, but then you quickly come back because you realize that’s not what’s important,” he explains. “That’s not the thing that’s important in life. And I think we get to see Rafael do that to a certain extent.”

But the reality is that Jane’s new, former playboy beau “is not as patient as Michael is,” Rodriguez admits. That said, “you get to see the differences between the two boys and how Rafael does have a beautiful heart at his core. He always does. He just has a different outlook on life.”

As a result, Jane will “have to fight for him after a while,” the actress adds. “I have to fight to prove that he isn’t a bad person,” especially when it comes to her family, who don’t quite trust Rafael yet. And you bet Alba will be doing everything she can to help keep Jane’s virginity intact when “special circumstances” find Rafael spending the night at the Villanueva homestead.

“He kind of can stay in the house, but under my terms, with the door open, of course,” Ivonne Coll shares with a laugh. “But he will be on the floor, next to the bed. He won’t be on the bed with her.”

Meanwhile, Rodriguez applauds the show’s message when it comes to respecting yourself and your partner. “I think that’s a beautiful thing to put out there for women who are fighting, maybe not to save themselves until marriage, but save themselves for a little. Like, ‘Hey, we just met!'” she says. “I think in this day and age, it’s like, ‘Let’s go on a date, and we should be banging the first night.’ ‘No! I don’t know you.’ And I think that it’s a good thing to start putting out there, this idea saying, ‘If you don’t respect that, then we don’t need to date again.’ I think that’s pretty badass of [Jane], pretty tough.”

Press PLAY to watch Jane and her mom talk sex and Rafael.