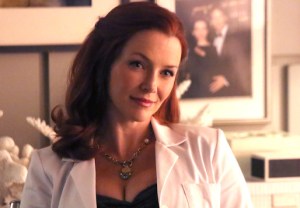 The doctor is back in.

“She will definitely be resurfacing,” showrunner David Amann teased as part of our Winter TV Preview Q&A.

Wersching first played the world-class plastic surgeon — who appears to have been a girlfriend and/or disciple of Castle adversary Jerry Tyson aka 3XK in the Season 6 episode “Disciple,” which featured cosmetically altered Esposito and Lanie “lookalikes.”