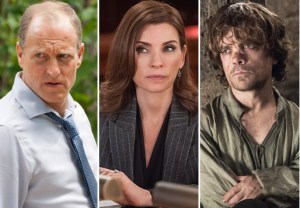 Nominations for the 2015 Writers Guild Awards were announced Thursday, and newcomers like Transparent and True Detective, as well as returning favorites such as The Good Wife, Louie and Game of Thrones, were both rewarded with multiple nods.

The winners will be announced on Saturday, Feb. 14, during simultaneous ceremonies in Los Angeles and New York City.