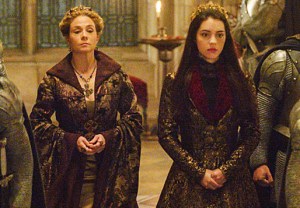 A harrowing event on Thursday’s Reign set the stage for more bloodshed at French Court and changed the course of Mary’s life forever.

A group of Protestant extremists broke into the palace, intent on murdering Francis — but when they realized the king was nowhere to be found, they set their sights on Mary, who was held down and raped in Reign‘s most excruciating scene to date.

TVLINE  | This was a brutal thing to put your main character through. Why did you feel it was necessary?
The rape is something we built to all season. We talked about it when we structured the season. We talked about the rising tensions in France and we talked about bringing them to a boil that became very personal and very destructive — not just to Mary, personally, but also to her marriage. 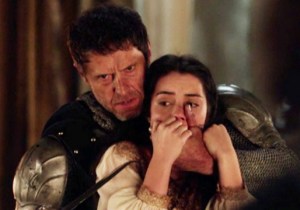 TVLINE  | Was there any historical reference for this, or was it completely your own invention?
The Protestant/Catholic tension happened and there were assassination attempts on the king that happened, and this was loosely based on that. Given the fact that we’d already toyed with history by having Francis kill his father, I didn’t want to leave that hanging; I wanted it to actually mean something in the context of what’s happening this season. This was a way of bringing all those threads together and showing how vulnerable rulers were at that time, particularly a female ruler.

TVLINE  | How is this going to affect Mary, both short-term and long-term?
Her sense of security is completely gone, and that’s something we’re going to follow through the season. In the short term, she’ll be traumatized, she’ll be scared, she’ll be fearful of her own safety. It’s also going to do incredible damage to her relationship with Francis because, even though it was a hideous act of hatred, it’s going to be hard for her to separate the rage people generally felt toward their rule from the choices that Francis was making.

TVLINE  | Francis seems ready to take action.
Oh yes, he’s ready to take action. It’s going to be bloody and violent and it’s going to have ramifications for the rest of the season. He’s ashamed of the fact that he killed his father, even though he had a million reasons to do it, because it put all of them in grave jeopardy. He thought he was going to dig himself out of this problem, but every time he tried, he got further in. Now, it’s all going to pay off; once Mary learns the truth, it’s going to be hard for her to separate the trauma of being raped and the bloodshed that’s taken place in their region from the choices that Francis has made. 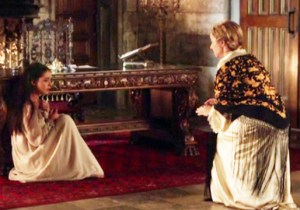 TVLINE  | The follow-up scene between Catherine and Mary was so powerful. This is, I assume, a major turning point in their relationship?
That’s one of the reasons I wanted to write this story, as well. I really wanted to bond those women. No one else can relate to what Mary’s gone through the way Catherine can. We always knew we were going to do the assault on Mary, and we always knew it wouldn’t be the end of the episode, that we’d move past it to how this would alter the relationship between Mary and Catherine. I love the character of Catherine, especially her ability to step up.

TVLINE  | The spoiler about Mary’s rape leaked online a while ago. Were you aware of fans’ responses? And what’s your response to their responses?
When people wrote to me online and said, “Please don’t do this,” I thought, “Thank God people are saying, ‘Please don’t do this.'” You wouldn’t want people to be saying the opposite. I felt their concern for a character that they’ve really come to care for, but it didn’t alter my thinking as to whether or not this was the right story to tell.

TVLINE | I assume you were also a little irked that the spoiler was leaked to begin with.
[Laughs] Well, that too. I did have that response, because it obviously came from someone close to the show. There was an e-mail that went out to the cast and crew — from me — because you don’t want things put out there out of context. It really does everyone a disservice, including the fans.

TVLINE | Lastly, I know we didn’t see exactly what was done to Mary, but could this result in a pregnancy?
I think that’s what she is fearing. I’m sure that’s what she’s afraid of; that would be horrible.

Reign fans, your thoughts on tonight’s developments? Drop ’em in the comments section below.