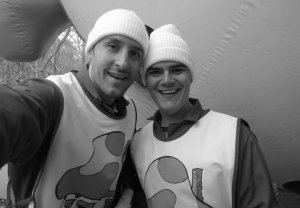 I have a confession to make: My little scoop empire was not built by me alone. I’ve had help along the way. Shocking, I know. But a key driving force behind the “Ausiello brand” has been someone who has largely remained behind the scenes. His name is Kit Cowan, and he’s one of the most talented designers/photographers/purveyors of good taste on the planet. He’s also, as luck would have it, my husband.

Chances are, if you have ever found yourself going “Wow, that looks cool” about anything I have produced over the past 13 years, Kit had a hand in it. He’s been my chief advisor on every major design decision at TVLine, and Entertainment Weekly and TVGuide.com before that. When TVGuide.com decided to make Ask Ausiello-branded T-shirts, Kit conceived and executed the retro-sports design. The huge photo of me and Keri Russell that Entertainment 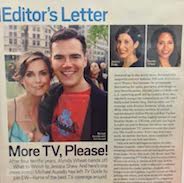 Weekly chose to run on its editor’s page to announce my arrival in 2008 was snapped by Kit. The Friday Night Lights on-set video diary that debuted on EW.com in 2009 — the man behind the flip-cam was Kit. My impeccably-designed dream office at TVLine — which also serves as the set for Spoiler Alert! — was furnished and curated by Kit. (He often reminds me that those vintage red sofas are on loan from his boss at Wyeth.) TVLine’s Comic-Con Survival station? That was Kit’s idea. TVLine pillows? Kit. This awesome pic of me riding the elevator at SDCC? Kit! If I looked halfway decent while talking about TV on a morning show or Entertainment Tonight-type newsmagazine, you better believe Kit chose my outfit.

Pretty ironic, considering Kit didn’t even own a TV when we met in 2001. Mind you, he did eventually come over to the dark side and discover that there were shows besides his beloved AbFab worth watching. (He even became so obsessed with the similarities between Push, Nevada and Twin Peaks that he wouldn’t rest until I agreed to co-write a TVGuide.com exposé with him.) His latest obsession: Cinemax’s The Knick.

Why am I telling you this now?

For the past nine months, Kit has been fighting a courageous battle against a rare and aggressive Neuroendocrine cancer. As that fight approaches its end, I’ll be taking a little time off. Aside from a few skipped Ask Ausiellos and less frequent updates on the long-gestating Gilmore Girls movie, not much will change. The insanely capable TVLine crew of Mitovich, Slezak, Roots, Swift, Gelman, Iannucci and Patrick — the best, hardest-working team in the business, according to a recent study conducted by me — will continue to keep you informed on all things TV. And I’ll be popping in here and there over the next couple of weeks, likely to remind you that there’s still no news on a Gilmore Girls movie.

Until then, as Kit — and his spirit animal, Patsy Stone — would say, cheers, thanks a lot.