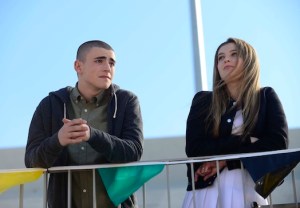 Red Band Society showrunner Rina Mimoun wants you to know two things: A central character will die before Season 1 is over, but the medical drama itself is not quite as certain to dance with the Grim Reaper — despite Fox deciding last week to limit its freshman season to 13 episodes.

“We were never pulled from the schedule. We were always airing our first 10 episodes, and then going off for the holidays. That’s why we built toward this cliffhanger,” insists Mimoun, who notes that shooting on the Season 1 finale begins Monday. “We’re going to air the last three. Yes, we had gotten an order for additional scripts, and now we’re not going to wind up shooting them, but it doesn’t mean we can’t come back for Season 2. It’s totally possible, and I hope you can clear that up, TVLine!”

With that request granted, TVLine also wanted to grill Mimoun about the aforementioned shockers from Wednesday’s fall finale: Leo and Kara’s day of outside-the-hospital bonding leading them to have sex in her car in the hospital parking lot; Emma returning home without having truly conquered her anorexia, and collapsing on her bathroom floor; Hunter heading to the operating room to get his new liver; and Nurse Jackson rejecting Dr. Naday’s romantic overtures on professional grounds, but reversing course and returning his kisses at the end of a long shift.

TVLINE | Knowing that Season 2 is very much uncertain, did you structure Episode 13 as a series finale? Will there be closure?
Absolutely. There’s closure for a lot of the current teen storylines that you’ve been watching, but the episode also shows you how the series itself is open-ended. Octavia Spencer is the lead of this show. She’s the heart and soul of Ocean Park Hospital, and it shows you that certain Red Bander stories may be all tied up, but we can tell other stories of people coming into the hospital using our amazing staff of Octavia [Spencer], Dave Annable, Rebecca Rittenhouse and Wilson Cruz — whose Kenji has become my favorite thing ever.

TVLINE | Maybe the biggest surprise of the fall finale was the Leo/Kara hookup. I loved that you went there because, to me, that’s been percolating all season. But of course, at the exact moment they’re going in for this kiss, Hunter is going under the knife for life-or-death surger,y and Emma is suffering an emotional collapse. There’s this sense of “Now? Now you kiss?”
The worst time ever. That’s the only time kids can kiss, have sex, is at the worst possible time ever. That’s the only way to make it exciting. Otherwise, it’s just a typical Thursday for them. But you really need high stakes. 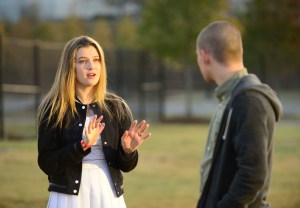 TVLINE | Were you always planning to explore Leo and Kara, or was it a decision that you made as Season 1 progressed?
Truthfully, we saw that chemistry in the pilot. One of the more memorable moments is when they’re riding in the elevator and you see Leo clocking her, and she looks around and takes notice of him. They also have that moment on the roof, and then we escalated it a little bit in the homecoming episode. In this weird way, everything about Red Band, especially when it came to the teen stories, was, “Who would these people be if they weren’t in the hospital?” And if they weren’t in the hospital, Leo and Kara are clearly the alphas. They’re the two that would have wrongly hooked up in school.

Leo and Emma are actually those soulmates that only occurred because of the circumstances that they were placed in. So we always knew that Leo and Kara had to get there, but this show doesn’t lend itself to that kind of crazy behavior because of all of the real drama that’s happening around these kids with their illnesses. So we had to take our time, but I’m hoping that people say we earned it. Or maybe they’ll throw tomatoes. I don’t know.

TVLINE | Talk me through Emma’s arc in this episode. The family dinner scene, in particular, was so uncomfortable and hard to watch, with her mother insisting, “You’re not leaving ’til you’ve cleaned your plate.” Emma’s monologue from last episode made it very clear she hasn’t made that much progress with overcoming her anorexia, and that she’s desperate for people to notice that she’s just pretending to be OK. And here, in the winter finale, she’s fighting that same fight, and ends up unconscious on the bathroom floor.
Ciara [Bravo] has been an unbelievable force of nature on this show. She’s just this serious little girl, and watching her experience this disease, to me, was so interesting. I knew so many people growing up who struggled with eating disorders. Women’s eating disorders is this topic that I could’ve written about forever and ever and ever.

So, what we wanted to do, getting her to the place where she is with her family, was to show just how truly horrible it is. One of the biggest fallacies that anorexic girls believe — and this is what Emma reveals in Episode 11 — is that they’re in control of the disease. The whole notion of the disease, to a certain extent, is that you’re controlling what you eat, that you have this amazing, unbelievable self-control. But once you really pull the veil off, the disease is completely controlling you, and that’s what Emma realizes.

TVLINE | I loved seeing her outside the hospital setting, too — really understanding the family dynamic.
And we’re not done, that’s for sure. This storyline does not wrap up in this episode. We go further with it, and you’re going to see her mom and dad again. We can’t leave them in such a terrible state. That would be too sad.

TVLINE | Moving over to Hunter and his liver-transplant surgery, how is Kara going to feel when she gets back to the hospital and realizes not only is he still there, but he’s on the table and may or may not survive the procedure?
She’s going to feel pretty bad, and she will react in a way that I would [describe as] “Pilot Kara.” She does not handle it well. Hopefully people see that there’s a sense of comedy in the way she handles it, but she definitely goes overboard, and [Episode 11] is a big, intense one for Kara and Hunter.

TVLINE | Was there debate about whether to go there or not?
In the very beginning, there was a debate. There was this thought that the show might be able to handle more comedy, and if it was going to skew in that direction, then tonally, [a death] would’ve been too hard to carry. But what we realized early on, and I was really happy to see that Fox agrees, is that the emotional stories were the ones where the show was really singing.

Once we saw that, we came up with a pitch, we took it to the network, and they approved it — and we were happy. I do think [a death] is incredibly emotional, and it feels real to what these kids are going through. It also gives us an opportunity to see how you come around the bend after something like that. 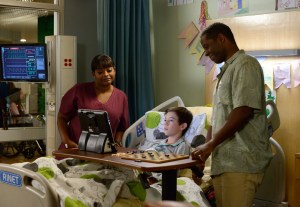 TVLINE | Let’s talk about Nurse Jackson for a second. She has been a slow build; little by little, we’ve learned more about her. And now, finally, in Episode 10, her personal life becomes more of the focus, culminating with her lip-gloss application and this kiss with Dr. Naday.
We were so excited to get Adrian Lester. Octavia just loves him, and they just had a fantastic chemistry. When we brought him in, we weren’t sure exactly what was going to happen. But then the two of them together were just magical, and what we realized was, “Here’s this nurse who, from the very beginning in the pilot, she seems very closed-off. She seems very hard to penetrate.” The whole notion of bringing in Dr. Naday was that it opens her up, and that’s what we actually saw in Octavia, which was fantastic. We definitely play with that all the way through the end.

TVLINE | And our other adult romance, we’ve got Dr. McAndrew and Nurse Brittany, and in the wake of their one-night stand — his whole “get over it or get out” speech — proves he’s not the nicest fellow.
I know. He’s got problems. But that’s a storyline that for sure is one that we don’t wrap up this season. We definitely keep that going, keep that thread alive, the complication of Dr. Erin Grace and the way Mandy Moore fits into it. That’s something that we feel has a much slower build, and we do not tie up this season. Hopefully, we’ll have a chance to continue to play with it.

TVLINE | How much optimism can you have, considering Fox cutting the Season 1 order? Is there any reason for fan optimism?
I would say, if you want it, fight for it. Honestly, that is how these shows come back — because there is momentum from the people who love it. This small group, it’s prefect for Red Band because the show is about this tiny band of fighters. When fans fight, it forces the network to say “OK, wait a minute. Let’s rewatch. Let’s look at all the numbers. Let’s look at the live [numbers]. Let’s look at the DVRs.” And that’s the theme of Red Band: “Don’t give up.”