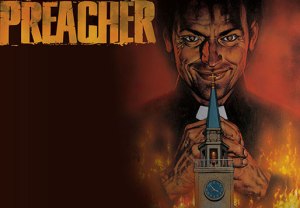 Preacher fans, your prayers have been answered: The controversial comic book series has been given a pilot order at AMC, the cabler announced Wednesday.

Seth Rogen and Evan Goldberg (This Is the End) will executive-produce the project, which is an adaptation of Garth Ennis and Steve Dillon’s 1990s comic. Sam Catlin (Breaking Bad) will serve as showrunner.

Preacher follows Rev. Jesse Custer, a conflicted Texas minister who merges with a spiritual force called Genesis — making him more mighty than the Almighty. Joined by his gun-toting girlfriend Tulip and the hard-drinking Irish vampire Cassidy, Custer begins a violent journey across the country in search of answers from a disenfranchised God.

“Every once in a while you find a project where all the elements line up beautifully. With Preacher, it starts with a bold, compelling, and thought-provoking comic book series from Garth Ennis and Steve Dillon and a whole lot of fans who already know Jesse Custer, Cassidy, and Tulip,” AMC’s EVP of Original Programming Joel Stillerman said in a statement. “Add to that the passionate and talented Seth Rogen, Evan Goldberg and Sam Catlin, an incredible producing team in Neal Moritz, the Original Film team and our good friends at Sony Pictures Television, and we have everything we need to be very excited to move forward on Preacher.”

As previously reported, multiple small- and big-screen adaptations of Preacher have been eyed in the past. Most recently, HBO passed on the project in 2008, calling the comic book “just too dark and too violent and too controversial.”

Will you tune in to a Preacher TV series? Hit the comments and tell us!