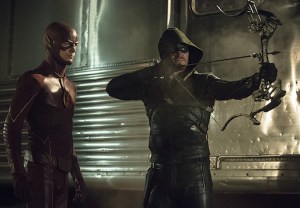 This week on The CW’s Arrow, the crossover capers concluded with the Flash team giving Oliver an assist with his boomerang problem — one that specifically targeted Diggle’s girlfriend Lyla.

For a famously stunt-heavy show, you had to be impressed by how this episode took time here and there to not just breathe but delve into what I’ll call “superhero theory,” via several talky exchanges between Diggle/Cisco, Oliver/Lyla (“”Sometimes bravery isn’t enough; sometimes the world requires us to be bold”), Felicity, Roy, Caitlin and Cisco, and, in the end, Oliver and Barry themselves.

Because yes, what Oliver does is different from Barry’s M.O. over in sunny Central City. The hurt is sometimes put on people in the name of saving lives, without a speedy CSI handy to “work the evidence.” When Barry contends, “We are supposed to be better than [the bad guys],” Oliver lays out for him the nitty-gritty of Starling City, including how he even saw his own mother killed right in front of… oh, right. So did Barry. Oliver shrugs, “Sorry I’m not as emotionally healthy as you.” (And, factoring in five years of island isolation, Honk Kong servitude and whatever else, the fact is he probably isn’t.)

Somewhat echoing Oliver’s larger point, Cisco later suggests to his counterparts that because he and Caitlin are helping Barry battle empowered metahumans with cute code names, that perhaps makes it all “less real,” that they in a way have been glossing over the gravity of it all.

But it was the heart-to-heart with Barry that really did some nice character work for Oliver. He posits to his peer that his work in Starling “requires the will to do what is ugly” — and as such, he fears that he has been trading away pieces of himself, namely the pieces belonging to Oliver Queen. Barry though, bravely and boldy tells his superfriend, “You’re full of crap,” that it’s because of Oliver’s resilient humanity, because of “a light inside you,” that he has made it through all that he has.

Plot-wise, disgruntled A.R.G.U.S. agent-turned-rogue Suicide Squad member Digger Harkness delivered some nifty visuals — peppering the air in several skirmishes with his shiny, whirling-and-whizzing blades — as well as brought some drama to the Diggle/Lyla relationship. After nearly an hour’s worth of correcting people (or being himself reminded) that Lyla is not his wife, and on the heels of landing at the business end of a boomerang, Diggle tells his “sweetie” that yes, he does want something — to marry her.

Now, for the purely fun stuff…. Where to begin? Cisco beseeching Felicity to show him and Caitlin the “Arrowcave” and all its “toys” (Arrowmobile sold separately). The Flash racing to Starling City, speeding past an oblivious Thea. Barry working the salmon ladder in Flash-mode, making it almost look easy. Barry using his speed to employ the others in defusing five bombs at once. You had to kvell with Felicity as her team revealed a costume mannequin for The Flash’s next visit, while Cisco gifted Oliver with a lighter, higher-tech jacket. And topping it all off was the Rocky III-like tag, with Oliver and Barry privately and playfully settling “once and for all” who would kick whose ass, the camera cutting just as the clash begins.

ARROW POINTS:
* “You really don’t care about my marriage, do you?” “Well I would, if you were still married.”
* “What’s that [salmon ladder] for?” “Distracting me from work.”
* “Is that your ‘We Have It Handled’ alarm?”
* “I need to get some paperweights down here!”
* Cisco going to take an iPhone pic of Flash and Arrow together.
* “So ‘stay away’ is what you’re saying.” –Cisco, after eying Oliver’s sister/Roy’s ex
* “When I fight you, it’s literally like you’re standing still.”

What did you think of “The Brave and the Bold”?