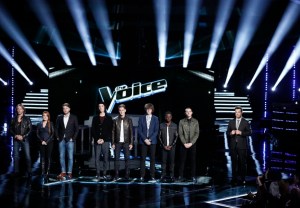 Usain Bolt, California Chrome and Amtrak’s Acela service have got nothing on The Voice.

When NBC’s reality singing competition hits the live voting rounds, it feels like The Hulk (in full rage mode) is pressing his foot against the accelerator — and there’s barely a moment to register what’s going down.

Think about it: On November 10, the Season 7 Live Playoffs began with a deep and exciting bench of 20 contestants. A mere 23 days later, the field has been slashed — with extreme prejudice — down to five semifinalists. Heck, with that kind of schedule, Pharrell and Gwen Stefani barely had a moment to realize the counterproductiveness of their song choices.

I know, I know… The Voice has the Emmy recognition and the 18-49 demo ratings and the singular screaming lady whose pre-recorded howling leads us out of every single commercial break — I refuse to believe there’s an actual human who can muster that kind of hysteria that many times per hour — but I still think the show would have a better shot at producing a bona fide chart-topper if it stole one idea from American Idol and gave us more time to get to know its contestants.

But that’s just the gripe of your humble recapper. And maybe the percolating success of “God Made Girls,” the new single from adorable robot-girl/”Possible Gen Y Answer to Dolly Parton” RaeLynn  — inability to hit all the notes live notwithstanding — will prove me wrong. You’ll have to weigh in down in the comments and tell me who’s right, who’s wrong. (Yes, that’s a Janet Jackson lyrical reference. Rated O… for Ooooooold.)

Whatever the case, let’s recap the quick and bloody reality of Top 8 results.

And with those performances on the books, I had to Tweet on the side of Season 7’s sole remaining woman — even though, intellecutally, I knew Chris might have a better shot to stop the predictability of a Matt McAndrew/Taylor John Williams Top 2.

In keeping with my track record of total failure in Season 7 #VoiceSave failures, however, America got behind tonight’s second-best performer and sent Chris Jamison to the semi-finals.

And with that, Pharrell’s Season 7 work is finished. And Adam has all three of his finalists in the Top 5. Dude definitely wins the title of Best Song Selector, even if he’s the least genuine person on the panel.

On that note, I turn it over to you. What did you think of The Voice quarterfinal results? Was the right person saved? Did someone survive who should’ve been ousted? Share your thoughts down in the comments!