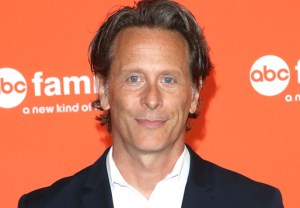 Another one of Ichabod’s famous contemporaries soon will make his way to Sleepy Hollow: The Fox series has cast Steven Weber (Wings) as President Thomas Jefferson, TVLine has learned exclusively.

We hear the series wanted someone who, like Timothy Busfield as Benjamin Franklin, could play the Declaration of Independence’s primary author as quite a commanding presence.

No word yet on when we’ll first meet Weber’s Jefferson or what circumstances will introduce him into the supernatural fray, but it’s likely he’ll be a posthumous font of knowledge, a la the series’ take on George Washington and Franklin. (Remember, Jefferson is the architect of that cell that’s currently containing Abraham, AKA the Headless Horseman.)

Weber’s long TV resumé includes stints on Studio 60 on the Sunset Strip, Law & Order: SVU, Brothers  & Sisters, Wilfred and Falling Skies. His recent gigs include Chasing Life and an appearance on the upcoming season of House of Lies.