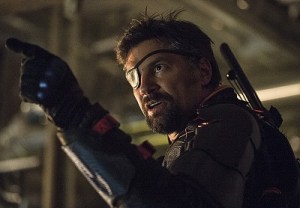 A major Arrow baddie is making a return.

It’s not clear in what capacity — or timeline — Slade will make an appearance.

He who is also known as Deathstroke was last seen during the Season 2 finale, in a supermax prison located on the island of Lian Yu. But perhaps he escaped long enough to play a part in Sara Lance’s murder, as many have speculated?

Arrow fans, hit the comments with your theories on Slade’s return!