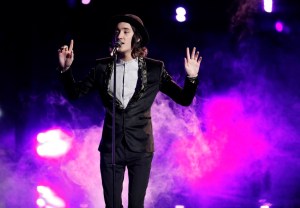 Gwen Stefani might still be using adjectives as adverbs — it’s “somebody like you that sings so incredibly,” not “sings so incredible,” girlfriend! — but everything else went “kablooey” on the Top 8 performance episode of The Voice.

My three favorite contestants going into the evening — Craig Wayne Boyd, Luke Wade and DaNica Shirey — delivered varying degrees of “eh,” “huh?” and “hrmm,” and in the process, made me take a second look at boarding the bandwagons of Taylor John Williams, Damien and Matt McAndrew.

Fret not, Ryan Sill is still the cheese, standing alone at the bottom of my weekly rankings, asking me to love him. But with everybody else up and down like planes experiencing turbulence in a thunderstorm, the race for the Season 7 crown remains wide open.

Yeah, you can probably guess my performance grades based on my intro, but let’s run through ’em anyhow.

Ryan Sill (Team Gwen) — Journey’s “Open Arms” — Grade: D+ | Ryan sang mostly in tune this week, but so what? His utter lack of emotional believability makes him the musical equivalent of a morning-news anchor giving “concern face” seconds before transitioning to a cooking segment about pineapple upside-down cake. I’m still not sure what Gwen meant by asking Ryan to “anti-perform,” but if her intent was for him to get upstaged by a variety of disparate “autumnal trees/cherry blossoms” set pieces, then mission accomplished!

Craig Wayne Boyd (Team Blake) — The Eagles’ “Take It Easy” — Grade: B- | Over the last two months, Craig has exhibited a strong, muscular tone that holds up nicely against the sometimes overwhelming Voice band. Tonight, though, while following Blake’s blunt instructions to bring something new to an Eagles jam he’s performed hundreds of times before, the country rocker swallowed at least a good half dozen notes like a toddler choking down a plate of broccoli and seemed more reliant on eyebrow raises than a true connection to the lyrics. Sure, dude didn’t truly botch any notes and he got the arhythmic audience to clap in time to the music — no small accomplishment — but his burners all seemed to be turned down to simmer at the exact moment he needed to power-boil.

DaNica Shirey (Team Pharrell) — Heart’s “These Dreams” — Grade: B- | First, I’ve got to note DaNica was the only member of the Top 8 who didn’t contribute to the Orient Express-style murder of “Say Geronimo,” and she was one of the standouts of Joe Jonas’ very enjoyable “Jealous” rendition. That said, I’m struggling to understand Pharrell’s strategy for the season’s sole remaining female: The arrangement he concocted for Heart’s ’80s power ballad — filled with plinky piano and complicated strings — was almost as fussy as the Disney Princess staircase that served as DaNica’s backdrop. The odd cadence of the music felt intermittently detached from DaNica’s booming vocals — and I’d hazard a guess it contributed to a final run of notes that put the “gory” in “glory.” If she somehow manages to survive into the Semifinals, here’s hoping DaNica is allowed to sing something uptempo and current — and from her preferred pop-soul genre, to boot.

Damien (Team Adam) — Adele’s “Someone Like You” — Grade: A- | Damien’s rehearsal footage had me bracing for a tidal wave of melisma with an undertone of false theatricality, but Adele’s masterpiece of heartbreak turned out to be the perfect vehicle for the former TSA agent’s style of R&B bombast. Whereas most of Damien’s performances have kept me at emotional arm’s length — as if he’s hitting a series of notes without letting me into his actual experience — his intimate, almost conversational phrasing on the verses and the quaver of his vibrato made me feel like I was hearing the song’s lyrics for the first time. That’s a huge accomplishment when you’re covering a recent and very ubiquitous hit — and it might just be enough to carry Damien right into the semifinals.

Chris Jamison (Team Adam) — Marvin Gaye’s “Sexual Healing” — Grade: B | If The Voice is going to produce a major pop star this season, Chris is probably the best remaining hope. He’s got a smooth falsetto, a broken-down grittiness to his lower register and an especially-good-looking-guy-next-door charm that made his recitation of lyrics like “I’m hot just like an oven/ I need some lovin'” feel more “mmm-hmmm” than “nuh-uh.” Still, I wish Adam had pushed the come-from-behind kid to take some liberties with the melody and arrangement: There’s still a skeptical voice in my head wondering if Chris has the chops to color outside the lines of a song and still make it work – and it’s awfully late in the season for that kind of question to linger.

Luke Wade (Team Pharrell) — Simply Red’s “Holding Back the Years” — Grade: C+ | Something about Luke’s performance made me wonder if he’d missed a cue or forgotten his lyrics or been hit over the head with a frying pan right before taking the stage. Why else would he be holding out his mic and demanding the teenyboppers in the front row of the audience sing along to a gorgeous 1985 ballad that he freely admitted would be unfamiliar to the under-30 set? Then again, maybe the dude was just struggling to find his way through a horns-heavy arrangement that robbed him of almost every chance to open up and belt that ear-wormy chorus. Even more troubling, the one time he finally did, the glory note was almost as ugly as your Thanksgiving turkey carcass as it rots in your local landfill. Could Team Pharrell be out of the race by Tuesday night? It’s not inconceivable!

Taylor John Williams (Team Gwen) — Lorde’s “Royals” — Grade: A | As one of The Behatted Troubador’s biggest detractors this season, I’ll confess I rolled my eyes a bit when Taylor declared his intent to “strip away the pop elements” of Lorde’s inescapable chart-topper in order to convey a darker message about homelessness in America. Yet while Lorde’s slinky musical candy definitely goes down easier than Taylor’s haunting, minor-key twist, the kid’s commitment to the cause — complete with a spares bass-and-strings arrangement — was pretty exciting on its own merits. I’m not sure if this is a one-week dalliance or the beginning of a beautiful musical affair for me, but I have to be honest: This was the performance of the night.

Matt McAndrew (Team Adam) — Damien Rice’s “The Blower’s Daughter” — Grade: B+ | I’m not sure any coach in Voice history has guided a contestant through the tricky process of song selection as well as Adam has for Matt. I’m in Blake Shelton’s corner — never before having heard this sweeping, sentimental ditty, which meant Matt had the pleasure of introducing it to what I’m guessing is at least three-quarters of the show’s audience. And the opening two-thirds was heartfelt and perfectly in tune. I wasn’t quite as enamoured of Matt’s switch to falsetto in the latter part of the song — to me, it’s simply not the sweet spot of his tone — but there’s no way this doesn’t carry the guy through to next week, and possibly directly into the finale.

Should Go Home (based on overall body of work this year): Ryan, Luke, Damien
Will Go Home: Ryan, DaNica, Chris

What did you think of this week’s Voice installment? Who were your faves? Who deserves to get the boot? Take our poll below, then sound off in the comments!