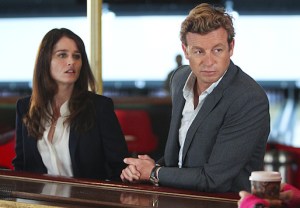 This Sunday, CBS’ The Mentalist kicked off its seventh and final season — as well as the official courtship of Patrick Jane and Teresa Lisbon. What’s your initial reaction to the sliiiightly new dynamic?

The hour opened up sweetly, with Lisbon (still on leave in the wake of her engagement/move imploding) suggesting to Jane that maybe he should have a key to her place. She then suggests they keep their romance under wraps at the office, seeing as her thing with Pike went down in flames. (If only everyone had so matter-of-fact a reaction to the news as Cho!) That said, Abbott is quick to pick up on “whatever’s going on” between agent and consultant.

Other changes at the FBI’s Austin office: Agent Fischer is gone (having abruptly left to care for a sick mom, though she did leave Lisbon a brief note wishing “Good luck with Jane!”), while Quantico rookie Michelle Vega has joined the team, played by Make It Or Break It‘s Josie Loren. Vega is near immediately a target of Jane’s skills (he insists she is former military; truth is she quit West Point when her dad died), and dare I say she seems to have turned young Mr. Adler’s head?

The Case of the Week was quite good, involving an undercover FBI agent murdered outside a bowling alley, where he was investigating some gun-running. Jane zeroes in on the tough-looking broad from the alley, but without any evidence, she isn’t ‘fessing to anything, let alone murder. Later, Jane realizes that the vic decades ago witnessed his best buddy’s (ultimately fatal) abduction, and thus possibly bumped into and recognized the kidnapper at the alley. A bit of razzle dazzle by Jane solves both cases, uncovering the hidden guns stash and revealing the alley’s manager to be the onetime kidnapper/killer.

At episode’s end, Jane bumps into Marcus Pike, and apologizes for how things played out with Lisbon. “So, do you have a plan?” Pike asks, noting how he was offering Teresa a life, a home and a family, if she wanted. Is the man she instead chose ready to offer her more than “Patrick Jane”? Jane later admits to Lisbon that he has no “plan” other than to let what makes them happy be their guide — and Lisbon seems OK with that. But for good measure, he has a vintage car waiting outside the FBI building, to take them away.