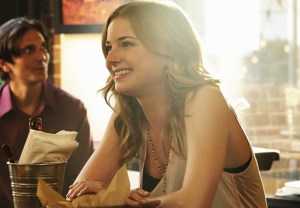 Something incredible happened on Sunday’s Revenge — an event so monumental, so shocking, it will surely go down in Hamptons history as the instant everything changed.

But while David’s stance on facial hair has clearly changed, one thing remains unwavering: his feelings for Emily. “I’m not going anywhere without my daughter,” David told Victoria, who — after realizing she’s lost nearly everyone who mattered to her — asked him to run away with her.

Vicky’s solution? Revealing the truth about Emily’s parentage to Malcolm Black via a secret messenger, though she never could have predicted that the messenger would be someone the viewers are already familiar with — and someone Jack is very familiar with. That’s right, friends, Mr. Porter is literally in bed with one of Malcolm’s peeps.

And she goes by the name of Agent Kate Taylor. Dun, dun, dun!

WHOA, BABY! | Ready or not, it looks like Daniel Grayson is about to be a father! He drunkenly stumbled up to Margaux’s office — classy as always, right off the bat — intending to convince her to take him back. Instead, he heard the two words no one on this show ever really wants to hear: “I’m pregnant.” But should we really take Margaux at her word? She might be one of the more trustworthy characters on Revenge, but that’s not saying much. (Side note about Daniel: Am I the only one loving his “honest” talks with Emily? I’m still not giving up on those two, even though they’re obviously terrible for each other.)

WORST DATE | Officer Ben thought he’d finally broken through Emily’s revenge-y exterior when she agreed to join him for an afternoon of drinking and dart-ing, but when she “bear-trapped” his hand during his first attempt at a kiss, it was clear this was so not a date. She eventually came clean about her true intentions — she was merely pumping Ben for info. about Alvarez — and the two actually seemed to connect. Like, on a genuine level. (Is Emily actually giving in to Ben’s charms? Is Ben becoming… interesting? Honestly, this is a lot to process on the heels of a holiday weekend.)

SEEING RED | Speaking of strange relationships, Louise caught wind of Nolan and Margaux’s plan to expose her family’s secrets — and she’s not pleased. If I know my girl Louise, she’s already cooking up a post-Thanksgiving feast of pure insanity, so I hope Nolan and Margaux are hungry! And now, I leave you with Louise’s immortal words: “You never forget your first mental institution.” Preach, girl.

All right, Revenge-rs, let’s talk: How will this Daniel-Margaux baby drama play out? Who’s dying next week? And most importantly, doesn’t David look so much better without his beard? Drop a comment with your thoughts and predictions below.