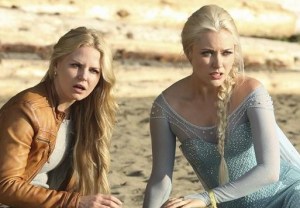 This Sunday on ABC’s Once Upon a Time, as a shat’storm began brewing, Elsa and Emma scrambled to find Anna, Rumple plotted against the industrious fairies and in flashback we learned for just how long Anna and Kristoff were Frozen.

IN ARENDELLE…. | Having been frozen by the Snow Queen before she set off for our realm, Anna and Kristoff defrost but are quickly cornered by Hans and his brothers. The lovebirds get free and head out to find the urn that Rumple ran off with, and to do that, they seek a “wishing star” like the one Anna’s parents procured before their trip. That quest brings them to Blackbeard, to whom they are willing to trade gold… ‘cept the buccaneer is part of a trap set by Hans, who wants his ex-fiancee dead. To that end, Blackbeard locks Anna and Kristoff inside a trunk  (lest there be “finterference” by mermaids, groan), but before they get pitched into the sea — in the same spot where Anna’s parents’ ship went down — Hans reveals that 30 years passed while they and Arendelle were frozen, conveniently synching things up for later.

IN STORYBROOKE…. | Upon Snow Queen unleashing the Spell of Shattered Sight — which unlike other curses takes its good ol’ time floating across town — Rumple fine-tunes his deal with the sorceress, assuring safe passage out of town for not just him but Belle and Henry, too. Elsewhere, the assorted good guys make plans to thwart the spell’s effects as much as possible, by separating loved ones who might do harm to one another or, in the rare exception, leave Henry in Regina’s (versus immune Emma’s) care. When Belle suggests to Emma and Elsa that a counterspell may be possible, either using Anna’s star necklace or if Anna herself be found, the “sisters” use a locator spell on the pendant to track Anna down once and for all. Rumple meanwhile plots to keep the fairies from foiling the curse (and give him the power boost he needs to break free of the dagger) by tasking Hook to use the Sorcerer’s Hat on Blue and the whole lot of ’em.

The locator spell leads Emma and Elsa to a collapsed section of the mines, and time is running out, so the debate becomes: “Save the town, or save the sister” (as Grumpy puts it). Elsa seemingly agrees to give up the pendant but in fact sneaks back to the mines with it, using her ice magic to blow a hole in the collapsed wall. Emma arrives just as she does so, and beyond the wall they find… the beach. And yet the enchanted necklace is glowing brighter than ever? Even when the necklace goes dark, Elsa refuses to give up hope, clutching it and wishing that Anna was “here with me now.” And with those words, the trunk containing Anna and Kristoff, near-drowning at the bottom of the sea, is transported across realms to the beach, where the sisters are joyously reunited. (Turns out, the necklace was the “wishing star” the girls’ parents had found — though I’m a bit fuzzy on how it got back to the castle, for Elsa to gift Anna, before their folks died.

Oh, and the girls are oblivious to the “message in a bottle, sent by their mother at sea, that also washed ashore. Wanna bet that’s a plot point soon?

The quartet race to the diner to deliver Anna to the fairies, only to discover that everyone is gone (having been sucked up by the Sorcerer’s Hat.) Rumple meanwhile has whisked Belle off to his shop for safekeeping, sealing the place with a protection spell. Regina similarly seals Henry in the mayor’s office, after apologizing for losing focus on Operation Mongoose. (“It’s OK, Mom,” he basically says. “We still have Season 4B!”) 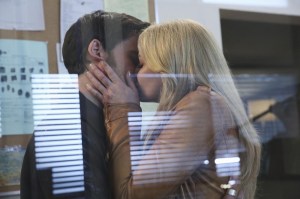 Robin Hood arrives to see Regina, professing, “I’m not afraid of you” — to which she ominously warns, “But you really, really should be,” before she slinks away to seal herself in her vault.

At the sheriff’s station, we get some amusing reunions between David and both Kristoff (who admire each other’s shorter ‘dos) and “Joan” (aka Anna’s”code name”), before David and Mary Margaret lock themselves in separate cells, while Kristoff handcuffs himself to a desk. Hook shows up, needing to see Emma “one more time” before the curse strikes. “I’m not a tearful goodbye kiss person, but maybe this once,” she says before sharing a liplock (to which I felt she had a conspicuous reaction. Did TLK just undo Hook’s servitude to Rumple? Or was she sensing he was “heart-less”?)

Just before the Spell of Shattered Sight (finally) hits, the Charmings profess, “No spell is strong enough to break what we have” — yet as the ouchie-sharp looking bits of glass start raining down on everyone (even slipping through air ducts), their look of love turns cold and they let go of each other’s hands….

THE QUOTABLE AND NOTABLE
* This is magic — it doesn’t care about ceilings.”
* “And I sang with you.”
* “Regina kept a whole dragon under there for 28 years. I’m sure you could fit a small princess, too.” #ForeshadowingAlert?
* “Yeah, well, if the mayor only has to worry about one villain — and it’s herself — that frees up a lot of time for infrastructure. I’ve had other issues!”
* “I should know better than to trust blondes by now.”
* “You rolled around in gold bars? Weird. And ouch!”
* Are we to infer that Hook traded his ship to Blackbeard, for the magic bean to find Emma in NYC?
* Assuming that Frozen 2 doesn’t accommodate the 30-year time jump, how will they undo that come Season 4A finale?

What did you think of the episode “Fall”?