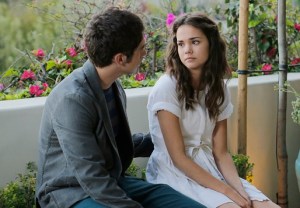 Ghosts of relationships past haunt The Fosters on the ABC Family drama’s Christmas special (airing Dec. 8 at 8/7c), with the short-lived romance between Callie and Brandon taking center stage.

Flashing back to the first Christmas she and Jude spent with the family, the installment gives viewers “more of an understanding of [Callie’s] relationship with [foster friend] Daphne and Brandon,” star Maia Mitchell previews.

While the hour is mostly set in the past between Seasons 1 and 2, it picks up with the Callie and Brandon’s surprise liplock at the end of the summer finale. That moment of passion suggests that there’s still some lingering feelings between the pair, but even if they don’t give coupledom another try, “they’re always going to be important to each other,” Mitchell says. “Whether they’re dating, whether that’s a romantic connection or just a mutual respect, they’re always going to have that.”

Meanwhile, Callie’s other on- and off-boyfriend may not be out of the picture. “Wyatt will always be a part of the Fosters universe,” co-creator Peter Paige hedges. That could spell trouble for Brandon, especially since Mitchell doesn’t believe Callie is over her ex.

“Wyatt’s really good for Callie, and she knows that,” the actress explains. “He’s a really positive male figure in her life. He’s someone she can trust, and she hasn’t really had that before.” 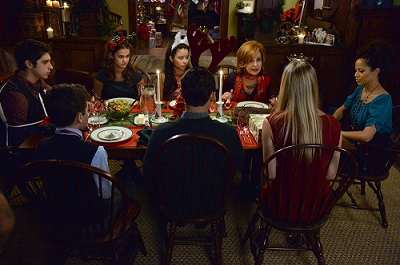 As for the rest of the clan, the festive outing reveals “something [about] every character that you didn’t know, that will impact how you experience the new season,” Paige teases. “It’s carefully constructed. We pop back in time to look at last Christmas… but every single character has some story, a puzzle piece that you’re going to need for Season 2B.”

To top it off, the episode holds an exchange, featuring returning guest star Annie Potts as Stef’s mom, that is dear to the creator’s heart.

“The Christmas dinner scene is on a short list as one of my favorite Fosters moments ever,” he says.