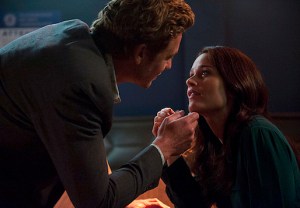 As CBS’ The Mentalist uncorks its seventh and final, 13-episode season this Sunday at 9:30/8:30c, series lead Simon Baker has but one wish for his character.

“I want a nude sex scene,” the Aussie actor told TVLine during a press call to preview the procedural’s farewell run.

Playing along, leading lady Robin Tunney quickly jumped in to quip,”That’s really just for, you know, the wrap party, for the crew to watch. Because we can’t allow any nudity [on camera].”

Baker clarified that he was in fact joking, though his point was that after seven seasons, there’s very little left to give that’s new. “The truth is that as an actor you put so much skin in the f–king game that at the end, I am just happy to scrape my skeleton together and walk out of here in one piece.”

Tunney’s own wish, meanwhile, already has been granted, in that the show she has called home since 2008 is being afforded that rare opportunity to end things on its own terms, and thus with a proper coda. “I have gotten [my wish] — that we actually got a definitive last season and they can tie everything up,” she said. “It is really unusual to be putting it to bed in the proper way.”

Of course, what sets this season apart from the half-dozen before it is that reformed con man Patrick Jane and CBI-turned-FBI Agent Teresa Lisbon are entering it as a consummated romantic pairing, having professed their feelings for one another — sealed with a kiss — in the May finale.

Tunney recalls a Season 1 press conference in which she, Baker and series creator Bruno Heller avowed that Jane and Lisbon would never hook up, “and I think we were telling the truth,” she says. Regardless, here we are, though all involved parties make clear that the romantic wrinkle will not overtake the show’s final episodes, either with angst, arguing or overly ardent interludes.

“These two are never going to be Who’s Afraid of Virgina Wolf,” says Heller, while Tunney herself adds, “Season 7 is not Fifty Shades of Grey done by The Mentalist.” Rather, Heller sums up the pairing as “a very sort of Jane Austen type of romance… between two people you’ve known for years, and you can see they are made for each other not in a fiery, crazy way, but in a human, gentle, correct way.”

Baker says of the “Jisbon” romance, “We are not exploring the obvious side of having a relationship in the workplace but more the pitfalls and speed bumps that you come up against when you know someone so well and then decide to have a relationship with them.”

Especially when Jane has pulled Lisbon away from the attractive future she had mapped out with FBI Agent Marcus Pike (played by Pedro Pascal) to offer her… what, exactly? That question surfaces in the premiere, and shall be addressed throughout the final salvo.

“This season is very much about the reconfiguring of a relationship that has been based on a mission, on a shared desire,” says Heller. “Now that the mission is over, they have to find out, as much as they love each other, how can they live together, and what will they do with their lives?