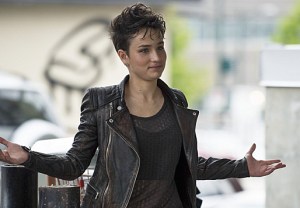 Though Sin was conspicuously absent from the immediate aftermath of BFF Sara’s murder, Bex Taylor-Klaus will reprise her Arrow role after the CW hit’s winter break, TVLine has confirmed.

“She’s actually in Episode 12, titled ‘Uprising,'” showrunner Andrew Kreisberg shared at the screening of the Flash/Arrow crossover episodes (airing Dec. 2 and 3). “She plays a pivotal part in the investigation into Sara’s death.”

“I just watched the dailies the other day, and it was really great to see her back,” Kreisberg added, “because she such an important part of Season 2.”

Hailed for her turn as Bullet during Season 3 of The Killing, Taylor-Klaus made her Arrow debut early in Season 2, as Sara Lance’s street-rat confidante, and last appeared in April of this year. In mid-August, the in-demand actress filmed a lead role in the pilot for MTV’s recently ordered-to-series Scream adaptation.