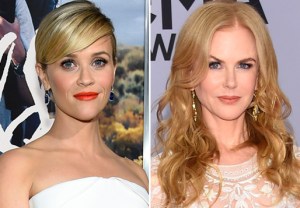 Reese Witherspoon and Nicole Kidman are poised to make a big move to the small screen.

The Oscar winners are developing a limited series based on the New York Times best-selling novel Big Little Lies, TVLine has learned.

The pair, whose respective production companies optioned the rights to Liane Moriarty’s comic tale earlier this year (with an eye toward turning it into a feature film), would star and produce.

Additionally, David E. Kelley — who’s coming off of CBS’ The Crazy Ones — is set to pen the adaptation as well as serve as showrunner.

The project will be shopped around in the coming weeks. (That noise you hear is HBO and Netflix revving their bidding-war engines).

Big Little Lies tells the story of three mothers of kindergartners whose apparently perfect lives unravel to the point of murder.

Who do you think should play the third mom opposite Witherspoon and Kidman? Post your casting suggestions in the comments!