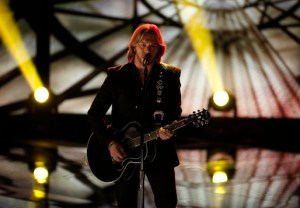 You can’t believe everything you hear on TV — not even (or perhaps especially) when it’s packaged in flannel-shirt wrapping paper, a folksy Oklahoma-accent and a corporate edict to keep the 18-49 demo rating above 3 million.

Which is why I didn’t let myself get angry or dismayed by Blake Shelton’s ridiculous exaggeration during The Voice‘s Top 10 performance episode on Monday: “This is the best live show I have ever seen in seven seasons.”

I don’t believe for a second that the country coach believes such ridiculousness — not after an evening marked by incredibly insipid song selection, botched glory notes and whatever term you’d use to convey the opposite of charisma.

But as NBC’s reality singing juggernaut grapples with the problem of having its most inspired quartet of coaches cook up its least inspiring set of finalists ever, the need for hyperbole and snake-oil sales pitches becomes understandable, although still inexcusable.

After all, with a good month of performances still on the horizon, perhaps some brutal honesty — or at least Christina Aguilera-style underhandedness — might be just what’s needed to help a promising-but-underperforming crop of contestants to raise their games.

Until that tough feedback begins to happen, however, it’s up to us Voice obsessives to keep putting the “real” in “reality.” To that end, here are my letter grades and reviews for the night’s performances:

Matt McAndrew (Team Adam) — Coldplay’s “Fix You” — Grade: C+ | Why didn’t Adam and guest mentor Patrick Stump advise Matt to use his hesitant falsetto sparingly? It’s simply not his sweet spot. Making matters worse, his attempts at “connecting” with the audience — hugging a stranger in the stands, holding a random SwayBot’s hand way longer than necessary — felt more awkward than authentic. I know, I know… he’s one of this season’s presumed front-runners, but I can’t help feeling like he’s destined for a Matthew Schuler-esque collapse.

Anita Antoinette (Team Gwen) — Passenger’s “Let Her Go” — Grade: B | There were a handful of notes during Anita’s performance that were more suspect than Gwen’s decision to style her like a Janelle Monae impersonator. That said, the reggae rhythms and philosopher’s-eye-view of the lyrics brought an unexpected element of surprise to a song that’s been covered on this show four times in the last three seasons (see Cole Vosbury, Kristen Merlin and Justin Johnes).

Damien (Team Adam) — Stevie Wonder’s “You and I” — Grade: C- | The problem with Damien is he only brings us notes and words — void of any specific intent and/or emotion. It’s like having Superman-level strength, then using it for nothing more than rearranging logs in a lumberyard. Impressive? Sure, at times, it can be. Meaningful? Nope, not usually. Oh, and while the four-coach Standing O indicated otherwise, dude’s pitch was all over the place tonight — at least in spots where his over-the-top riffing didn’t render the melody unrecognizable.

Reagan James (Team Blake) — Iggy Azalea’s “Fancy” — Grade: D+ | Look, there’s no denying that by the end of her number, Reagan sounded gaspier than Betty White completing an American Ninja Warrior obstacle course. But while her execution failed to match her ambition, it also has to be noted that she was on the receiving end of one of the hinkiest backing tracks in show history. Seriously, what happened to the bass? And was the Voice band playing at all? Because to my ears, the music pumping in behind this budding-star teen had all the depth and energy of a cheap karaoke track above a Korean restaurant in midtown Manhattan. (Yeah, I know, that’s a really specific reference — but I know of what I speak!)

Luke Wade (Team Pharrell) — Otis Redding’s “Try a Little Tenderness” — Grade: C+ | I usually love Luke, but tonight, his attempt to bring out the deep yearning and effortless sensuality of an oft-sung soul classic played out like an unexpected “card declined” at the end of a fancy meal. This ditty should’ve fit squarely in Luke’s wheelhouse, but the vocal arrangement leaned too hard on him to sell the ad-libbed whoops and hollers of the final chorus, rather than the melody being carried by the background singers — and it exposed some possible artistic limitations in the process. Here’s hoping this misstep will help Coach Pharrell learn that “hey, he covered Otis Redding well once before, so let’s repeat the formula,” is not a formula for good television, nor a solid building block for a post-Voice career.

Craig Wayne Boyd (Team Blake) — Johnny Cash’s “I Walk the Line” — Grade: A- | I won’t lie: I felt a slight twinge of skepticism as Craig Wayne’s intro package informed us he’d be reinventing a country classic — even as the reality singing competition junkie in me remembered how cool it was when Adam Lambert twisted “Ring of Fire” to fit his needs on Season 8 of Idol. Yet while Craig’s reimagining of the Man in Black couldn’t have been more different than that rascally Glambert’s approach, it was nevertheless a stunner in its own way. By mining the verses for the maximum vulnerability and tenderness, and heightening the drama of the chorus with a slower, strings-heavy twist, Craig made me believe his intent of making this a song about better life choices on behalf of his adorable son. By the time the southern soulster’s voice opened up on the final chorus, it was like a shock paddle to the chest of what had been a telecast in desperate need of a pulse.

Ryan Sill (Team Gwen) — Muse’s “Starlight” — Grade: C+ | He sang mostly in tune this time around — a noticable improvement from last week’s bludgeoining of Duran Duran — but there’s something insipid about the way Gwen’s pet contestant performs, like he’s a wide-eyed puppy fetching a newspaper to get his master’s approval. There’s no real heat or heart or urgency to Ryan’s phrasing, no rough edges to his notes, which is why it’s so odd when the coaches prattle on about his rock credibility. I mean, Gwen and Adam and Blake and Pharrell do realize Ryan’s not competing in some parallell race to win an unaired season of The Glee Project, yes?

DaNica Shirey (Team Pharrell) — Whitney Houston’s “I Have Nothing” — Grade: B+ | I cannot punish DaNica simply because her coach forced her to sing the most done-to-death ditty in the history of reality singing competitions. (Has no one ever heard Whitney’s “Heartbreak Hotel” or “My Love Is Your Love” or heck even “My Name Is Not Susan” or “Exhale” or “Didn’t We Almost Have It All”?) Again, though, Pharrell took the startlingly uninventive approach of “Oh, DaNica was great on ‘Saving All My Love for You,’ so let’s try to carbon-copy her into the Top 8.” Dude, no. Seriously, no. True, DaNica sang the paint right off the walls on this one, but I did detect a couple instances where she seemed hesitant at the start of a phrase or verse. Those niggling imperfections left DaNica a few steps off the pace of Season 6’s Tessanne Chin — perhaps the only contestant ever to upgrade “I Have Nothing” past even Ms. Houston in her prime. (Blasphemous, but true!)

Taylor John Williams (Team Gwen) — The Beatles’ “Come Together” — Grade: C- | “Come Together” requires a trip to the swamp, a sense of playfulness and definitely some inherent oomph — all of which were missing from Taylor’s straightlaced, super-serious approach. Combined with a final chorus that found him getting drowned out by the Voice band and a last note that put the ‘gory’ in ‘glory,’ this was, at least to my ears, one of the night’s lowest points. But hey, so what? Gwen’s 15-year-old self loves that Taylor doesn’t wear socks and wants to post his pictures all over her locker. (I’m not being sarcastic, people, she actually said that out loud.)

Chris Jamison (Team Adam) — Mark Ronson and Bruno Mars’ “Uptown Funk” — Grade: B+ | Nobody’s going to touch Bruno Mars in his prime (aka Bruno Mars right this second). But dagnabit (one of Blake’s favorite words, btw), the hottie who needed Adam’s Live Playoffs savesure did bring a sense of unabashed swagger and sexiness to one of the night’s rare upbeat selections (not to mention a choice so compltely current, half the audience probably got introduced to it via Chris’s cover). Could it be the dude who lamented in his intro package about not getting a role in his high-school musical is transforming before our eyes into a viable pop star? I’m not ruling out the possibility!

What did you think of this week’s Voice installment? Who were your faves? Who deserves to get the boot? Take our poll below, then sound off in the comments!