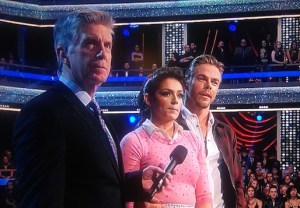 With no more also-rans and for-your-amusement-only celebs left to bog down the proceedings, crunch time finally came to Dancing With the Stars – and just in the nick of time, too!

Yep, it’s time to break down Part 1 of the Season 19 finale — complete with one final, heartbreaking elimination.

Truth be told, you could’ve made a case for any of the fearless final four — Alfonso Ribeiro, Sadie Robertson, Janel Parrish, and Bethany Mota – cleaning off a mantelpiece in preparation for the coveted Mirrorball Trophy, and dreaming of the oh-so-familiar, confetti-littered celebration.

But first things first: Monday night’s live show featured both Judges’ Pick and the epically crucial Freestyle Dances, and as it turns out, one of the most perfect (at least based on judge’s scores) nights in DWTS history!

It must be mentioned, of course, that Ttensions flew in many directions during tonight’s live show, as the DWTS broadcast was interrupted several times — most notably mere seconds before the elimination was announced — for breaking news reports on the hotly anticipated Michael Brown grand jury announcement from Ferguson, Mo. But many viewers — at least here in the New York City market — were dumfounded when ABC’s broadcast resumed not with news of the DWTS elimination, but of the latest episode of Castle.

Given that glitch, let’s high-kick right to the highlights (and with so many 10s flying about, this was a virtual coin toss):

DANCE OF THE NIGHT: Janel Parrish and pro Val Chmerkovskiy | In perhaps the most emotional and authentic freestyle of the night, Janel’s intoxicating performance lifted the ballroom (and the judges) into spasms of affection. “This was the visualization of a love poem,” gushed Bruno Tonioli, before calling it “hypnotically beautiful.” Carrie Ann Inana and Len Goodman were absolutely wowed by the dance’s awesome deadlift (“I was petrified,” admitted Val of the eye-popping lift), while Julianne Hough added, “What you two have is so real and so authentic … it just shows the trust that you guys have had from day one to now … it was absolutely breathtaking.” As expected, nothing but perfect paddles here.

RUNNER-UP DANCE OF THE NIGHT: Alfonso Ribeiro and pro Witney Carson: “You set the bar from day one with that dance,” said an ecstatic Carrie Ann after Alfonso’s spectacular jive (which got a solid 36 in week one), before adding, “I don’t know how it was so much better than the first time!” It was no surprise the judges went as appropriately nuts as the audience. “You dance like Frank Sinatra sings,” exclaimed a blown-away Len, who added, “you have just taken an enormous step into that finale!” But Julianne’s enthusiastic matter-of-fact shout out to their perfection (“There’s not one thing that you missed”) was then overshadowed by Bruno’s intergalactic reaction: “You have propelled that jive into interstellar space,” he cried, “hurray for you!” Yeah, nothing but 10s here, either .

WORST OF THE NIGHT: Bethany Mota and pro Derek Hough: You know it’s a red-hot night when a string of 9s is considered an utter flop, but though Bethany’s show-opening jive had a no-fault-of-their-own technical issue with the set, it stood out as a minor blip in an otherwise almost flawless night.

“I’ve discovered things about myself … that I never thought I could do,” said a gracious Bethany of her DWTS experience, before adding, “I never thought I would be this far in the competition.”

And with that, it’s your turn. Did the right couple really go home? And who deserves the Mirrorball prize? Take our poll below, then sound off in the comments!