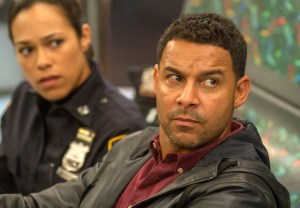 This week on ABC’s Castle, Detective Esposito found himself on the wrong track, held hostage on a subway train by a man with a mysterious agenda.

Because of news preemptions at the top of the hour, I was not privy to the catalyst for Espo’s subterranean ordeal — something about someone who was killed for investigating a lab? — but the gist of the episode remained largely decipherable. Besides, the main question here was how Espo (and his new transit cop friend) might extricate themselves and the (oddly scant number of!) other riders from this tense standoff, while at the mercy of a man in a suicide vest and holding the always-trusty “dead man’s switch.”

Thanks to a “secret”/test surveillance camera on the train (an actual pilot program is underway here, FYI), Beckett & Co. are able to keep an eye on Espo’s sitch for part of the episode, until the bomber almost magically deduces its presence just as Espo was about to make a grab for the guy, in concert with the HRT squad (their plan communicated via pizza box).

Lanie, as she fretted for her beau(/love?), wound up contributing to the investigation, having noted on the surveillance video that the hostage-taker was sickly. As it turned out, he had purposely and unwittingly been exposed to a volatile flu strain, for the purpose of sparking an epidemic and making the aforementioned lab rich, thanks to their conspicuous stockpiling of vaccine.

Espo and his transit cop friend ultimately think fast and jump the guy, using a shoelace to secure the dead man’s switch. There’s a brief bit of drama surrounding Espo’s exposure to the flu strain, but by episode’s end he is back at the 12th hugging those near and dear to him — Lanie included, after the cute transit cop nudged him to go after what’s real (i.e. the woman whose name he mouthed before risking his life) versus fantasy.

I don’t ride the subway often enough these days to speak for the readily available cell phone signal that Espo was getting, not near a platform but decidedly in a tunnel, but I invite my more familiar New Yorkers to chime in! Also, those subway seat patterns seemed a bit festive.

All told, this episode was “fine,” though not the least bit Die Hard-like (as I had hoped). Having the bomber be misguided/oblivious seemed too pat, and the “release a virus to sell vaccine” plot has been overdone in recent years. I’d rather they had, like, set aside a two-parter to do a proper, highly intense riff on The Taking of the Pelham 1-2-3, featuring a lot more derring-do, rather than burn through the premise this way.

What did you think of the Espo-centric “Kill Switch”? Will these events prompt Javy to invite Lanie to explore something more “real” with him?