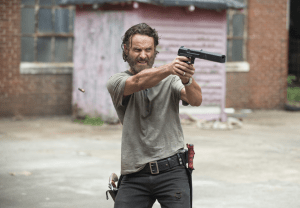 Remember a few weeks ago on The Walking Dead, how well Rick’s plan to get the drop on Gareth and his man-eating sidekicks worked? This week’s plan didn’t go off like that. Like, at all. As a result, our heroes’ attempt to bust Beth and Carol out of Grady began to look less like a rescue mission and more like a suicide mission. Why? Read on…

WHAT A HOLY S—! | Even before Rick, Daryl, Noah, Tyreese and a still-very-much-grief-stricken Sasha set off for the hospital, Gabriel was reminding us of what a whiny bastard he is. (Honestly, what makes him think that the coward who sentenced his parishioners to grisly deaths gets to bitch about his church being deconstructed for parts?) Once he was alone with Michonne, Carl and Little Ass-Kicker, the preacherman only got more annoying, trying to clean the Termians’ blood off the floor with his bare hands and refusing to let Carl teach him how to fight. Eventually, Michonne — somehow managing to remain empathetic — reached out to the man of the cloth and reassured him that, although they sometimes have to do terrible things, “they’re worth it.” For a second, it appeared that she had kinda gotten through to him. But nope, false alarm. She hadn’t. In fact, while he had supposedly been “resting” in his office, he had actually been using the machete that Carl gave him to pull up the floorboards and leave. (At least we can give him props for his determination: Even stepping on a nail — crucifixion analogy? — didn’t stop him from hobbling into the woods.) Mind you, he still practically had “victim” tattooed across his forehead. Yes, the jumpy mess managed to keep himself from being bitten by a female walker. But, true to lily-livered form, he couldn’t bring himself to bash her head in and put her out of her undead misery because she was wearing a cross. It can’t end well for him. It just can’t. (And, honestly, I hope it doesn’t.)

ANGER MANAGEMENT | Meanwhile, Glenn, Rosita, Eugene, Abraham, Tara and Maggie — or GREATM, as Tara dubbed them to distract herself from their shared disappointment — remained exactly where we left them. Which meant that Eugene still hadn’t stirred after his (well-earned) beating, and Abraham was still so full of rage that, at one point, Maggie had to point a gun at him. “Sit down,” she ordered the ginger hulk, “or I’ll put you down.” Finally, after a looong pause, he did what he was told. Later, while fetching fresh water with Glenn and Rosita, Tara surprised her pals by saying that she was over the whole D.C. thing and just wanted Eugene to wake up. “He had one skill that kept him living,” she noted. “Are we supposed to be mad at him ’cause he used it?” (Personally, I’m with Glenn: “Damn right,” he replied.) Of course, Eugene had many other skills, too. For instance, as Rosita soon demonstrated, he taught her how to filter muddy water. All in all, for as bummed/ticked/worried as the threesome may have been, they had a pretty lovely afternoon. While doing some fishing, Glenn and Rosita bonded big time, and Tara opened a walker’s backpack and found… a yo-yo?!? Back at the fire engine, Maggie told Abraham to get over himself already, adding bitterly, “It’s never gonna get any better than this.” At last, he admitted that, when she had taken aim at him, he had thought he wanted her to shoot him… but he really didn’t. And, right about then, Eugene began to come to. (What can we say about that? Considering that he’s the only character who might actually be more weaselly than Gabriel… um, yay?)

THE BEST-SLAYED PLANS | In the city, Rick diagrammed his plan to break into the hospital as if he were some kind of John Madden with bloodlust. In response, Tyreese — fearing the worst case scenario — suggested a less deadly approach, one that involved luring out a coupla Dawn’s guards with gunshots and then trading them for Beth and Carol. (Since Daryl seconded the motion, it passed.) Alas, it was a disaster. First, the quintet’s apprehension of the guards was thwarted by the unexpected arrival of a third guard, whom Daryl was forced to subdue in the grodiest way imaginable. (He then had to chill out Rick — in full-on kill-or-be-killed mode — to keep him from shooting the guy.) Then, the guards bickered about the best way to keep the situation from turning into a bloodbath. In the end, it was decided that Rick and Co. would take their cues from hostage Lamson — a good guard, according to Noah — and hold a swap meet with Dawn. Trouble was, throughout the episode, Tyreese had been encouraging Sasha to come out of mourning, and she snapped out of it just in time for Lamson — first name, horribly, Bob — to tell her a sob story about the old friend that he saw outside among the bony walkers deteriorating on the street. She moved to the window to shoot the lost soul for Lamson, only to have him push her into the pane and escape! While all this was going on, Beth — her face as full of stitches as Frankenstein’s monster’s — was at the hospital, attempting to look out for Carol… and accidentally getting the plug pulled on her! Here, it got really weird: Though Dawn gave the order to take Carol off life-support and refused to reverse her decision, lest it upset her guards, she also gave Beth the keys to the drug locker so that she could give the patient a fighting chance. (Steven thought it was weird, too, and warned Beth that no way was Dawn acting out of the goodness of her heart.) Sadly, even after Beth dosed Carol, she didn’t wake up.

OK, your turn. What did you think of the episode? Were you surprised that Lamson KO’d Sasha, or by now, do you just assume that every new character is rotten to the core? Who, if anyone, do you think will bite the dust next week? Hit the comments!