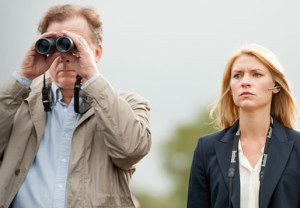 You’d think the fact that this week’s Homeland is titled “There’s Something Else Going On” — a direct quote from Carrie Mathison that underscored her increasing unease about the impending prisoner swap — would’ve prepared me for the episode-ending humdinger.

But noooooo. I foolishly let my guard down after the child-bomber threat passed and Saul was safely back in U.S. hands, and I regretted doing so the second those missiles rained down on the CIA’s caravan. (What do you call it when you gasp and scream at the same time? ‘Cause that’s what I did.) It was a spectacular twist that capped an extraordinarily tense hour. But enough about the ending. Let’s start at the beginning, shall we?

THEM’S THE STAKES | In the episode’s opening scene, we watched as the five prisoners the CIA agreed to hand over to Haqqani in exchange for Saul took their first step toward freedom. As Quinn prepared to sign off on their impending release, he was reminded of their collective crimes against humanity. Basically, Saul’s return was coming at a heavy price, and no one knew that more than Saul himself. Freshly back in captivity, a defeated and deflated Saul finds himself reluctantly co-starring in one of Haqqani’s propaganda videos, before being forced to bunk with a mysterious boy. When said boy starts tossing and turning in the middle of the night from an apparent nightmare, Saul comforts him by cooing some kind of Islamic lullaby. (Update: As reader Anya points out, he was actually saying, “Everything’s going to be all right” in Urdu/Hindi.) The following morning, the kid returns the favor by offering Saul a glass of Pakistan’s finest diet Snapple. Their fast friendship quickly unravels when Saul discovers that the youngster is tagging along with him to the prisoner exchange while wearing a bomb vest. And why is this particular kid “volunteering” for such a mission? Turns out, one year ago — when Saul was the director of the CIA — his family was wiped out by a drone strike. Saul can barely contain his horror.

DESPERATE HOUSEHUSBAND | Meanwhile, back at the U.S. Embassy, newly-outed mole Dennis Boyd is in full-tilt denial mode. He swears (first to John and then to Carrie) that he had nothing to do with stealing the secret documents from his wife Martha’s computer, nor did he tamper with Carrie’s meds. “You are a traitor, and I am the f—king CIA,” Carrie bellows after he demands to speak to an attorney. “You poisoned me. I could’ve died out there. You think I’m going to let you talk to a lawyer? Sit the f—k down.” (Carrie Mathison, will you marry me?) Dennis’ prayers are (seemingly) answered when Martha busts in and orders Carrie to back away from her man. She escorts Dennis back home, where she proceeds to lightly grill him about his possible role in Embassygate. But he once again maintains his innocence. We later learn that her little interrogation intervention was just a ruse. Yep, much to my relief, Martha is working with Carrie. She knows there’s a good chance her hubby is guilty as sin, and her suspicions are confirmed when she catches the creep trying to make a run for it. She responds by banishing him to something called “the guard room.” (Side note: Laila Robins is da bomb, people.)

IT’S SHOWTIME! | At the scene of POW swap, Carrie and John meet with ISI villainess Tasneem and Karen Cartwright’s boyfriend from Smash at an undisclosed airport hangar to go over the day’s festivities. Carrie slips away to call Karen Cartwright’s boyfriend from Smash and voice her concerns that Something Else is Going On. He informs his American crush that he was shut of most of the planning, which does nothing to calm her fears.

The action shifts to the airport’s tarmac, with Carrie & Co. (the five prisoners included) set up at one end of the runway and Tasneem & Co. set up at the other. The van carrying Saul comes to a stop at the midpoint between the two camps, and Saul — hell-bent on sabotaging the trade-off — has to be forcibly removed from the vehicle. The van then pulls away, leaving Saul and Bomber Boy standing practically side-by-side. “What’s the boy doing there?” an alarmed Carrie asks Tasneem via walkie-talkie, unaware that said boy is wearing a vest from Forever 21 and Fanatical’s new winter collection. When his jacket’s killer lining comes into view, Carrie flips the frak out. Tasneem feigns ignorance,  speculating that the kid is likely Haqqani’s version of an insurance policy. Despite the curveball, Carrie agrees to begin the exchange… that is until Saul — who just locked eyes with the prisoners he’s responsible for setting free — sits his ass down and refuses to participate. (My heart can’t take it!)

With the prisoner exchange now in serious jeopardy — and Haqqani’s goons threatening to detonate the boy if Saul doesn’t stand back up — Carrie volunteers to go knock some sense into mentor. She wastes no time playing the Mira card. (Earlier in the ep, she promised Mrs. Berenson she’d bring her husband home safe.) Saul, in turn, plays the “You think I can live with this?” card. But Carrie reminds him that not only will his defiant stance result in their deaths, but it will also claim the life of the TNT’d tyke. “They put the vest on him,” he coldly replies, “not us.” And that’s when Carrie plays the “you sound like them” card. “This is not who we are,” she wails. “This is not who you are.” That seems to do the trick, because next thing you know Saul is back on his feet and hobbling back to Camp CIA with Carrie. Phew, crisis averted. Or so we think…

THE GRAND FINALE | En route back to the embassy, Saul is just about to take a call from Mira when their caravan is hit by multiple missiles. (That’s what we in the TV biz call a pants-crapper moment, folks.) The surrounding SUVs appear to fare worse than the vehicle carrying Carrie, Saul and John, but not by much. Lockhart, who overhears the twin explosions back in the CIA opps room, puts it best when he exclaims, “What the f–king f–k?!” In a move that will come back to haunt him, he deploys all of the marines out onto the street to survey the damage and look for survivors, effectively rendering the embassy unguarded. Meanwhile, when word of the tragedy reaches the guard room, where Martha is visiting her lying, scheming, no-good other half, Dennis finally comes clean. Yes, he’s in cahoots with Tanseem. And the final piece of intel he shared with her was the location of a secret tunnel that connected the embassy to the street. A secret tunnel Haqqani and his small army were now using to storm the unmanned embassy. Um… holy wow.

What did you think of the episode? Do you think anyone other than Carrie survived the attack? Do you agree with me that this ranks among Homeland’s best episodes ever? Hit the comments!