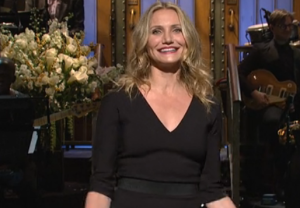 When a long-time A-lister with proven comedic chops like Cameron Diaz hits Studio 8H to host Saturday Night Live, expectations tend to be high. But would the Annie star’s wacky charm spin her first official hosting stint since 2005 — she’s done numerous guest spots, it must be noted — into comedy gold?

Here are my picks for best and worst sketches of the night:

Best: “Back Home Ballers”
Giving the ladies of SNL a special chance to shine, this homegirls-heading-home-for-Thanksgiving rap video took awhile to percolate, but moved quickly into instant classic territory, especially after an on-fire Leslie Jones (“I’m up to my ass in bowls, bowls, all types of bowls!”) got up in our grills. Can we get a Christmas version, please?

Best: German Chancellor Angela Merkel on “Weekend Update”
Summarizing the recent G20 summit, Kate McKinnon’s wild-eyed, blonde-bobbed, shoulder-padded delight had plenty of zingers (“I was told at the summit I had ‘resting bitch face.’ This cannot be true, in Germany we do not rest, we toil until we collapse!”) plus an especially naughty come-on to President Obama (“America has turned their back to him. I would turn my back to him, but in the fun way. His Keystone Pipeline is XL!”).

Best: Black Annie
You knew this Annie-parody was coming, and while it was far from perfect, Jones dominated the proceedings (“This is not about you orphan bitches, this is about black Annie!”) with a capable assist from Vanessa Bayer’s white Annie (“Yo, yo, yo, what up playa?”).

Best: Woodbridge High School Experimental Theater Showcase
Though this wicked parody of a self-serious high school theater troupe was at times cringe-worthy, it was also eerily accurate and hilarious enough (“What? They built a pyramid out of those boxes and they didn’t even use it!” whined suffering audience member Thompson) to ultimately shine.

Worst: Dr. Dave and Buggles’ Animal Hour
What do you get when you combine live animals (a caged monkey and a lemur, which crawled around on Diaz’s head the entire time) with a few half-decent lines from Thompson (“This little dickweed cranked my junk off my body!”)? An overly-long, mostly unfunny sketch that completely wasted the host’s comedic talents.

Worst: Night Murmurs
The SNL ladies hit it out of the park early on, but was this bizarre take on phone sex operators even supposed to be funny? When the most memorable part of a sketch is a highly-effective fan (which gently ruffled the curtains, lingerie and hair throughout) you know you’re watching one hot mess of a sketch.

What did you think of this week’s SNL? How would you rate Diaz as a host? What was your favorite sketch? Sound off in the comments!