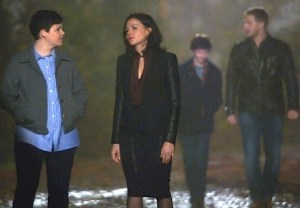 We’ve got questions, and you’ve (maybe) got answers! With another week of TV gone by, we’re lobbing queries left and right about shows including The Walking Dead, Jane the Virgin, Chicago Fire and How to Get Away With Murder!

1 | Has the absence of Once Upon a Time’s Ruby ever been more glaring than when Mary Margaret, David et al were tracking Emma? Is the mighty Sorcerer’s Hat’s “sucking” action not powerful enough to reach past a pair of doors? And what happened to Regina having exactly zero regrets, seeing as this life did bring her Henry?

2 | Instead of overlaying hideous patterns onto it, couldn’t The Good Wife simply have used the computer to shift the color of Alicia’s dress? In 2014, would it really be such a huge political disaster for Peter and Alicia if they got divorced? And the way Peter kissed Ramona in the limo felt like much more than an office fling, no? 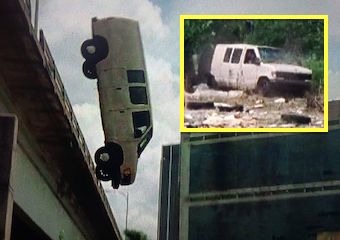 3 | Um, how did the Walking Dead van land upright, after nose-diving off the bridge? (Heck, the POV through the windshield even indicated it was arse-over-tea kettle!) And was the quiiiietttt all-Daryl/Carol episode a case of “Be careful what you wish for?”

4 | Was “Run” the strongest Newsroom episode of the past two seasons?

5 | Did you die a little at Valerie’s failure to remember the last name of producer Jane (aka “Mean Spider Eyes”) on The Comeback? And is this season’s arc leading toward serious marital woes for Val and Marky Mark? 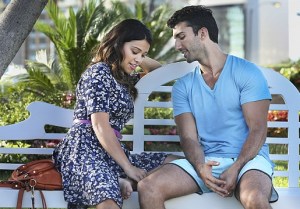 7 | Jane the Virgin fans, given this week’s crushing break-up with Michael followed by that steamy kiss with Rafael, where does your heart lie when it comes to the men in Jane’s life? And our gal’s moving pretty quickly from guy to guy, yes? 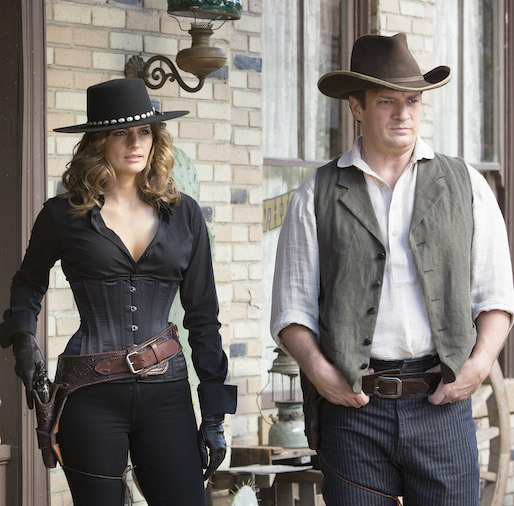 8 | Where does this Castle get-up rank among Beckett’s Hottest Looks of All-Time?

9 | Was The Flash unwise to reveal his true face to (the albeit imprisoned) Tony/Girder?

10 | Agents of S.H.I.E.L.D. fans, is it possible that Ward’s family is actually A-OK and a false news report is all part of some long con orchestrated by Coulson in tandem with repentant Grant? And why are so many shows – The 100, S.H.I.E.L.D. – out to hurt the amazing Dichen Lachman?

11 | Even though he ultimately helped solve the Case of the Week, shouldn’t Forever‘s Henry at least have gotten a slap on the wrist for tampering with — and cooking! — a piece of evidence?

12 | Did New Girl‘s Jess/Ryan kiss approach Jess/Nick levels of squeedom for you? On a related note: Julian Morris’ character can’t be that perfect for her, can he? He’s gotta have a major flaw, right?

13 | Were you surprised to see The Mindy Project‘s Danny — who had no problem with Mindy naming their future children in the Season 2 finale — freak out at the idea of a pre-Christmas proposal?

16 | As gripping as this week’s Sons of Anarchy was, did it almost become silly how many people would ask Jax or Gemma what’s wrong, only to get an oblique non-answer (a la “It’s fahmily business”)? Thank God at least Nero finally got looped in! And why exactly hasn’t Gemma committed suicide yet? 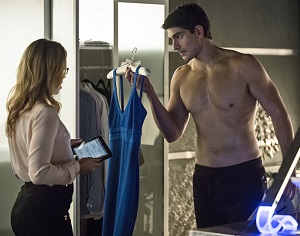 17 | Was it “OOC” for Arrow’s Felicity to coo over a couture dress (and $10 million necklace), or had the queen of bandage dresses/pencil skirts/midriff-teasing tops established herself as a bit of a fashion plate? And can we please put an end to the Pretty Woman trope in which men buy women dresses (that always, somehow, fit perfectly)?

18 | After their interaction at the CMA Awards in this week’s Nashville, are you worried that Luke will cheat on Rayna with Sadie? And the show’s version of the CMAs looked shockingly authentic, no?

19 | Are we to think that American Horror Story: Freak Show’s Dell isn’t just a brute but a dumb one to boot? Or is there some other explanation for why he’d make Amazon Eve — arguably the toughest broad on the carny circuit — his first pick to kill for Stanley?

20 | Did we miss the part on Vampire Diaries where they explained why Jo didn’t know where the twins were? And why is it assumed that the male twin (Kai, Luke) is going to consume the female (Jo, Liv) when they merge? 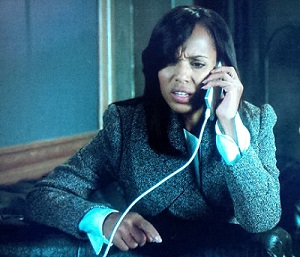 21 | On Scandal, knowing that something was gonna go very bad during the episode-ending “dance party,” what did you think/worry would happen? (That maybe the Stevie Wonder album was some sort of bomb?) And is this the first time in TV history we’ve ever seen a character (conspicuously) stop to charge their cell phone?

22 | As satisfying as How to Get Away With Murder‘s killer reveal was, are you a bit disappointed the show went the “self-defense” route? On a related note, how are they going to explain the missing carpet? And while we now know who killed Sam, does anyone really think that Annalise’s now-dead hubby was the one who offed Lila? (If not, who’s your top suspect for that murder?) Finally, an ABC crossover thought: Can we get Connor and Revenge‘s Nolan in a room together, pretty please?

23 | Did Allison Janney just snag her second straight Emmy for Mom via her hilarious, wordless reaction to landing a six-figure salary at a stock brokerage — followed by a panty-flashing escape out the window as her forged résumé was about to be exposed?