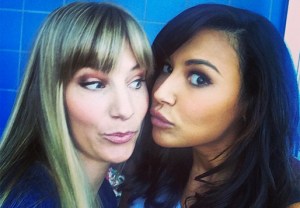 Naya Rivera on Friday posted a picture of a wedding veil on Instagram, teasing an “exciting day on the set of Glee,” but TVLine has learned exclusively that Santana and (presumably) Brittany won’t be the only gleeks tying the knot in the Fox comedy’s final season.

So… which of Glee‘s many fluctuating couples do you think will join Brittana in wedded bliss? Kurt and Blaine? Puck and Quinn? Rachel and Jesse St. James?

You’ll find out when Glee — now airing on Fridays — returns for its final season on Jan. 9!

For now, drop a comment with your best guesses below.