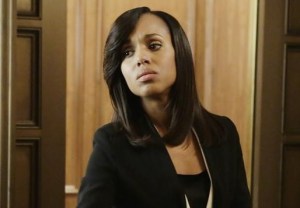 This Thursday on Scandal‘s Season 4 fall finale, Cyrus made headlines, Fitz made an unpopular decision and Jake made too long a trip to fetch a blanket.

With a massive target on his back, Rowan initiated a “shutdown” protocol for B613, landing Jake, Quinn et al on a kill list. Meanwhile, the search for Papa Pope turns up Mama Pope, who’s been kept in that hole at the super-secret compound. “Tell ’em, Livvie. Handle them,” Maya says to her daughter, expecting to be freed from custody. But no dice. All Liv wants to do is get her dad — or more specifically, to “hunt him, find him, kill him.”

Making things extra-interesting amidst this manhunt, LizzieBear confronts Olivia about betraying her to Cyrus, warning of consequences — and moments later, 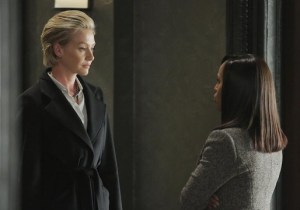 “sexy-time” pics of the “Chief of Staffs” and Michael are in the press. Fitz makes the call to “fight this,” and to that end Olivia proposes a marriage between Cy and the pro, that she can spin as a “love story” for America to gobble up. Cy, though, refuses to do that to dead James.

Quinn finds and warns Charlie about the shutdown protocol, prompting him to suggest that with the Grim Reaper looming, they (ahem) “affirm life.” Quinn protests for a half-second, before they go at it like the rabbits they are. Afterward, Quinn realizes that Charlie has been tasked with taking her out; a half-naked wrestling match/fight ensues, with neither able to dispatch with the other; instead, they bond some over Charlie’s dead granny.

Cyrus hands his resignation to Fitz, beseeching him to “build yourself up by knocking me down.” Fitz hesitates, a lot, before saying the words his CoS wants to hear: “Thank you for your service, Cy. It’s been an honor.”

Huck gives Jake what seems to be a lead on Rowan’s whereabouts, but instead they get Silence of the Lambs‘d — Rowan is actually inside Olivia’s apartment. When Liv finds him there, she attests that he can’t disappear and “be a normal person” because he is not normal. Rowan erupts at the “ungrateful” daughter who would rather “send in her clan of good ol’ boys to kill me” that appreciate what he made her into. “It is you who cannot be normal,” he argues. “It is you who has no comprehension of love.” In the midst of his oration, Liv grabs his gun off the table, and after some consideration, pulls the trigger. But there are no bullets. Nonetheless, Rowan is wounded. “You just shot your own father!…?” he marvels before slinking away, back into the shadows.

If I may make an aside 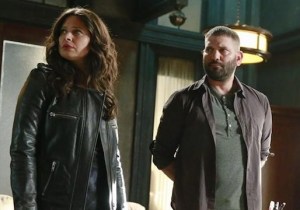 here like the @Serial lady, “Let’s talk about Kubiak for a moment.” Quinn has informed Olivia that Winslow’s crony is dead (the bloody business witnessed by young Javi), and that Lizzie and VP Andrew have been boning. Huck determines that the previous time all three of those people were together was at Winslow’s firm the night Caitlin was murdered. Quinn digs around at the firm and finds the client for that meeting to be “WACO Inc.” Hmmmm.

Back to Olivia, who visits her mother aka the holder of “the PhD in Rowan’s brand of crazy,” only to be told, “Girl, you need to move on… You’re just like him.” When Liv balks at the comparison, Maya notes: “Look around Boo, I’m in a cage, you’re visiting me,” just as it was during her captivity at B613. Touche!

When Liv finds Cyrus lamenting the media’s labeling of him as a “gay stereotype” as he packs his office, she sets out to “Cyrus Beene” him, and does so quite effectively. “Your life’s unfair? Grow the hell up, because that is how it is!” she roars. “The Cyrus I know doesn’t hide… and wet his pants like a little bitch baby. He’s a patriot, he bites the bullet, so I want to know right now who you are!” Cyrus fights back, “I’m not a little bitch baby!!!” and then follows through on the faux marriage plans with Michael, telling a TV interviewer he won’t apologize for “falling in love.”

Lizzie confronts Mellie upon hearing that Fitz won’t attack West Angola, and as such he’s “lost the party.” “I thought we were on the same page…?” the RNC boss says, to which Mellie interrupts, “Because we were both screwing Andrew?” The First Lady acknowledges that while Andrew may be “dedicated” in bed, he is not POTUS material, so Lizzie better choose wisely come election time. “I’m not nearly as gentle as Andrew,” Mellie warns. “It will hurt.”

As the fall finale came to a close, Quinn and Huck realized that WACO stands for West Angola Commercial Organization, an assets fund managed by Winslow’s firm. As such, Lizzie and Andrew were quite upset that Fitz elected not to wage war on the country — especially since West Angola “targeted” Andrew in what was revealed to be staged bombing that the veep knowingly dodged. But why the surveillance of Olivia?

As Huck and Quinn mull 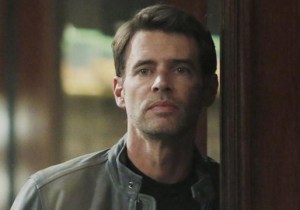 that one, we see an irked Andrew meet with Fitz, while Olivia at her apartment invites Jake to join her in a “I’m no longer thinking about my father” dance party, set to Stevie Wonder’s “Don’t You Worry ‘Bout a Thing.” Liv evokes Kelly Taylor by telling Jake that while she wants Vermont with Fitz and she wants to stand in the sun with him, right now “I’m choosing me.” And then she chooses to have sex on her piano, so Jake goes to the boudoir to fetch a blanket (for traction/warmth) and pillow (for cushioning)… but by the time he gets back, Olivia has vanished, her wine spilled (!!!!). Meanwhile at the Oval Office, Andrew taunts Fitz, who now realizes that Olivia has been targeted, “How are you liking that war now, sir?”

(Elsewhere: David learned through interviewing Abby about Cyrus’ scandal that she’s bedding Leo, while Huck presented Astrid with his B613 files, to prove he’s not crazy as she thinks.)

What did you think of Scandal‘s midseason finale? (Season 4 resumes Jan. 29.)