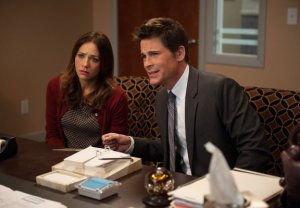 This will litrilly be music to Parks and Recreation fans’ ears: Chris and Ann are headed back to Pawnee.

TVLine has learned exclusively that Rob Lowe and Rashida Jones will reprise their respective roles during the NBC comedy’s seventh and final season.

Earlier this month, EP Mike Schur strongly intimated that Lowe and Jones were among the Parks and Rec vets on his final-season wish-list, telling TVLine, “We made a list of people that we needed to see back one more time. We didn’t get everybody we wanted, because some people had other obligations. But a lot of the people we were hoping to see one more time — we managed to make that happen.”

Lowe and Jones — who are slated to appear in one episode — departed Parks midway through Season 6, when Chris and Ann relocated to Michigan to be closer to her family. Jones briefly returned later in the season after Ann gave birth to little Oliver.

NBC has yet to announce a premiere date for Parks.