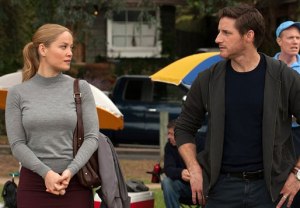 The return of a familiar face, wistful memories of a European adventure, an emotionally loaded Italian dinner — yep, “nostalgia” was the magic word for many characters on Thursday’s Parenthood.

But did all those fond reminiscences end well? In some cases, yes. (FINALLY, JOEL AND JULIA.) In others… well, let’s just say Jan. 8 can’t come soon enough.

Here’s how the evening played out for the Bravermans & Co. in this week’s fall finale:

JOEL & JULIA | Let’s start out with the no-longer-estranged couple, because their final scene in Thursday’s episode has legitimately put a bounce in my step. (Am I embarrassed of this fact? Not even a little.) Julia begins the hour with plans to meet Joel for lunch — a lunch that she promises a frustrated Chris will include the signing of those divorce papers. But Joel has other plans once his wife arrives at the restaurant, the same place where they dined on their first date and when Julia found out she was pregnant with Sydney. Although Julia is ready to put pen to paper, Joel gives a helluva tear-inducing monologue, promising Julia that although he walked out on the vows they made to each other, he’s never stopped loving her — and he’ll honor her for the rest of his days, if she’ll have him. (Sorry, just give me a second to stop sobbing real quick.)

This time, it’s Julia who walks out, leaving the restaurant with a whole lot on her mind — and some very blank divorce papers. Irked by how long Julia’s been delaying the divorce, Chris decides to call their relationship quits, and Julia runs to Camille with her love conundrum. (Side note: Doesn’t it feel like ages since one of the Braverman kids got advice from Zeek and/or Camille? I understand the need for very separate storylines this season, but boy, have I missed the family actually interacting.) One thing I’ve always loved about Camille is her ability to make every problem seem like the most manageable thing in the world, and that’s no different in her chat with Julia. “You know what marriage is all about? Forgiveness,” Camille informs her daughter — but Julia’s not so sure she can take that step with a man who bailed on her when the going got tough.

Just when I’m thinking all hope really is lost for the couple, Joel and Julia finally get their heads on straight (and their bodies very close) later that evening. Julia bursts in to Joel’s place, defiantly signs the divorce papers and, after Joel follows suit (asking her before he does, “This is really what you want?”), the pair realizes the weight of what those signatures mean — so they kiss! Finally! Pop quiz: Was I yelling “Come on already!” at my TV screen during this climactic moment? Answer: Obviously. And although there are still fences to be mended between the two, I think things are headed in the right direction for Joel and Julia. Like, horizontally. On Joel’s couch. 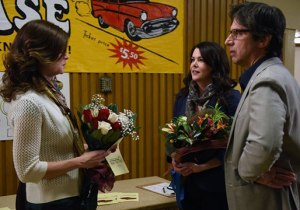 SARAH & HANK | Perhaps no one experienced a bigger time warp this week than Sarah, who encountered Mark Cyr for the first time since learning of his engagement last season. Mark’s filling in for the high school drama teacher during Ruby’s run in the school play which, first off, brings up two very important questions:

1) Who would have pegged Ruby for a theater lover?

2) Why didn’t anyone make the obvious joke about Ruby playing Sandy in Grease, when her mom is also named Sandy? That’s comedy gold, people! (Update: I have since learned that this joke was made. I will blame my oversight on Jason Ritter’s endless, distracting charm.)

Anyway, Sarah and Mark get a chance to catch up the next evening, and after she drops Amber’s baby news on him, he lets Sarah know he’s also about to be a dad. (Little-known fact: No one does a better “crestfallen-but-trying-to-hide-it” face than Lauren Graham.) Since this seems like the really real last time we’ll see Mark before series’ end, Sarah and her former fiancee admit they’re glad to have known each other. (Sniff.) And although Hank questions if Sarah is really happy with him and all his emotional baggage, she sweetly assures him at the end of the episode that there’s no place she’d rather be. (Cue up that Clean Bandit song!)

KRISTINA & ADAM | The Saga of Max and Dylan isn’t yet over in this week’s episode. In fact, it comes to a head at Chambers Academy’s open house, where Dylan accuses Max of harassment after he makes uncomfortable physical contact with her. Dylan’s little-seen parents make a scene at the school, accusing Kristina and Adam of lacking discipline for their son. (Which, considering last week’s outburst, they sorta are.) After Dylan’s parents threaten to pull her out of Chambers, Adam and Kristina have a long overdue chat with Max about how sometimes, the scale of affection simply isn’t fluid, and Max’s feelings for Dylan might never be reciprocated. Fortunately, Max gets the picture, so the Bravermans venture to Dylan’s place, apologize profusely and convince Dylan’s parents to let her stay at Chambers Academy at least until the school year is over.

ZEEK & CAMILLE | On this episode of Californian Adventures with Drew and Zeek, the Braverman patriarch enlists his grandson to book a vacation to France, where he’d like to surprise Camille with a trip to a bed-and-breakfast he stayed at many moons ago. Unfortunately, Drew’s concern about Zeek’s health leads him to tell Camille about Zeek’s travel plans — and Zeek doesn’t take too well to Drew’s blabbing. On the bright side, Camille is completely moved by Zeek’s plan to surprise her with a French adventure, and they agree to book the trip once they’re both in the know. But as we see in the episode’s final minutes, that trip will have to be postponed: Zeek awakes at 3:16 that morning, unable to move his body, and begs Camille to call an ambulance. (Nooo!)

OK, your turn. What did you think of the fall finale? Grade the episode via our poll below, then hit the comments to back up your choice!