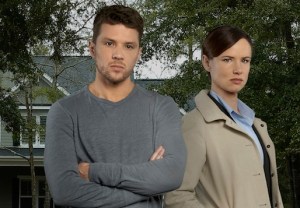 ABC’s midseason schedule will swap Crime for Murder, and Secrets for Resurrection.

The network announced on Wednesday the premiere dates for a pair of limited-run dramas: Secrets and Lies, starring Ryan Phillippe and Juliette Lewis, will bow Sunday, March 1 at 9/8c (with a special two-hour premiere), while the Felicity Huffman vehicle American Crime, written by Oscar-winning screenwriter John Ridley (12 Years a Slave), kicks off Thursday, March 5 at 10/9c. The shows will have 10- and 11-episode seasons, respectively.

The latter show will take over the plum post-Scandal slot after How to Get Away With Murder airs its two-hour Season 1 finale on Thursday, February 26 at 9/8c.

ABC’s loglines for the two incoming series are as follows:

Secrets and Lies: Ben Crawford (Phillippe) is about to go from Good Samaritan to murder suspect after he discovers the body of his neighbor’s young son, Tom Murphy, in the woods. Even as Detective Andrea Cornell (Lewis) digs for the truth in her investigation and pegs Ben as a “person of interest,” the case unfolds from Ben’s perspective — whether he is guilty or not. In trying to clear his name, it is Ben who peels back the layers of these suburbanites’ lives in their quiet cul de sac, revealing their dirty little deceptions and all-too-crowded closets overflowing with skeletons. No one is above suspicion. Ben’s family’s life, already privately in disarray, is turned upside down as he sets out on a complicated journey to prove his innocence.

Secrets and Lies is based on an Australian hit of the same name, with Private Practice‘s Barbie Kligman writing the pilot and serving as executive producer.

American Crime: A young couple in Modesto, California were brutally attacked in their home leaving Matt Skokie, a war vet, murdered, and his wife, Gwen, unconscious, barely hanging on. The crime sends shock waves throughout the community stirring up tensions across socioeconomic and racial lines in this gritty new drama – from the points of view of all those involved.

Excited about these ABC newcomers? Can you imagine a spring without Annalise Keating and her panicked students? Sound off in the comments!