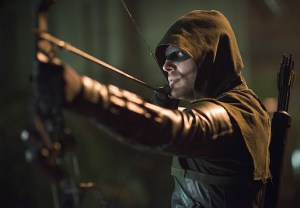 This week on The CW’s Arrow, the titular vigilante found himself in the sights of a most ardent admirer, while Oliver himself was led to wonder if he missed the mark with Felicity.

First and foremost — and maybe I say this as a man who loves women (and can at times have a proclivity for redheads) — welcome to the Arrowverse, Carrie “Crazy Pants” “Cupid” Cutter. Supernatural mom Amy Gumenick had a fine showing in her debut, to the point that, well, I was rooting for the Arrow to, you know, “indulge” her fantasy for a couple of weeks. Lord knows, the onetime bad boy playboy could use the occasional good… decompression.

As an adversary to incite rousing action sequences, Cupid was a bit soft, admittedly; even the climactic fight scene lacked significant punch, save for when she kicked free the grating and sent them tumbling to the subway tracks below. Maybe her stint with the Suicide Squad will help up her game?

But many of you did not come here to talk about Cupid. No, there was a heaping serving of Oliver/Felicity angst in this episode, primarily on his part, as his No. 1 gal’s increased devotion to Palmer Technologies :-P boss man Ray rubbed him the wrong way. Diggle, for lack of anything else to do this week, had his buddy’s “six” in a whole other way, first dropping in on Felicity to ensure that she was aware of Oliver’s conflicted emotions (“We both know it was the wrong choice”), and then confronting Oliver himself toward episode’s end.

“I just want her to be happy,” Oliver said, on the heels of a sequence in which he reiterated his feelings/position to Felicity through a confrontation with Cupid. “If that were true,” Dig countered, “You’d be with her.”

Oliver apparently came around to that POV and went to tell Felicity how he feels “before it’s too late” as Diggle warned… only to enter her office just as Ray consummated their “platonic”/couture dress night out with a well-received kiss. (Some might even say it was… super.) After Oliver slinks away (stealth can be handy in love, too!), Ray pulls himself away, fearing he crossed a line — though the homina-homina look on Felicity’s post-pucker punim indicated she was all in. Later, Ray privately surveys the schematics for an “Atom Exosuit”….

Elsewhere in the episode: A mop-topped, cocksure DJ named Chase (Carrie Diaries‘ Austin Butler) saved Thea’s grand-opening bacon, then planted a not-rebuffed kiss on the club boss at the end of the lucrative night; in flashbacks, Oliver and Tatsu bonded some (and the latter busted out her mad katana skillz) when Maseo was feared dead; and the final scene threw Captain Boomerang at us, setting the stage for the two-night crossover event airing Dec. 2 and 3 (see the first photos below).

ARROW POINTS
* Palmer Technologies has a swirling “atom” logo. Subtle!
* “Oh God. I have a type.”
* “There is nothing platonic about couture.”
* “You could use a little therapy yourself.” “What gives you that impression?”
* Cupid: “So, you’re asking me out?” Seriously, isn’t she the cutest??
* “Lyla said Cutter is nuttier than the last woman they had on the Suicide Squad.” Aww, another Harley Quinn nod.

What did you think of “Draw Back Your Bow”?