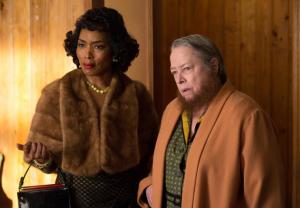 Another one bites the dust. In this week’s episode of American Horror Story: Freak Show, Dell flunked his “Test of Strength” by bumping off a fellow freak to keep his dirty little secret… well, you know, a secret. Who ended up on display at the American Morbidity Museum? Read on and find out!

TURNABOUT IS FAIR PLAY | When last we saw Jimmy, he was about to rescue the Tattler twins from Dandy or — considering the killer’s foul mood — die trying. Gloria insisted, of course, that they’d never harm the sisters. After all, she noted, “We paid good money for these girls.” However, after Dot realized that Dandy had read her diary, the die was cast. Communicating telepathically with her besotted sib, she convinced Bette that their benefactor was, to put it mildly, off, and they had to leave. So, reluctantly, Bette told Dandy, “I’m sorry, but I choose my sister, always.”

Back at the fairgrounds, Jimmy – livid about Elsa’s treachery – didn’t ask but informed her that he was singing Nirvana’s “Come As You Are” at that evening’s show whether she liked it or not. But, to his (and Bette’s) surprise, Dot then lied about how they came to reside at the Motts’, thereby putting egg on Jimmy’s face and Elsa uncomfortably in their debt. Among their demands, they wanted 50 percent of the box office… and for Bette to become a comedienne.  At least Jimmy could console himself with the fact that he was now sleeping with Maggie. Plus, off Bette’s assertion that Dandy had been the real hero in the clown killer case, he had a strong suspicion that Richie Rich was the nutso who’d damn near sawed his new girlfriend in half. But how to prove it… ? Hmm.

QUEER AS FOLK | After spotting Dell looking for ill-fated Andy at the gay bar, Stanley threatened to expose the strong man’s sexual orientation if he didn’t provide him with the remains of a dead freak. Unfortunately for Dell, his attempt to chloroform Amazon Eve only resulted in him being smacked around and tossed out of her trailer. His intended victim even added insult to injury by asking rhetorically, “Who’s the strong man now?”   Upon learning of Dell’s attack on Eve, Jimmy barely managed to keep Ethel and the freak show’s other women from killing the tough guy by promising to take care of the ruffian himself. His method, however, left something to be desired: He got so drunk with Dell that he tearfully admitted that he knew the brute was his father. Then, the unthinkable happened. A minute after it appeared that Dell was going to hit Jimmy with a brick and deliver him to Stanley, he embraced his son, and the lobster boy warned him about the women’s death threats!

The next morning, it got even more shocking. Dell, still blotto, yelled to the whole freak show that Jimmy was his son, and the lobster boy was able to say words that he never in his whole life had: “Good night, Dad.”

Of course, with Stanley continuing to put the screws to Dell and the women’s dissatisfaction with Jimmy’s handling of the strong man easy to see, he was hardly out of hot water. He handled his first problem by creating himself an even bigger one: He horrifically squeezed the life out of poor, helpless Ma Petite! (As if no one would notice the disappearance of the troupe’s most beloved member!) Meanwhile, Ethel and Co. still had (his) murder on their minds – and they don’t even know yet that he attacked their kindly doctor, who, in the aftermath, committed suicide!

PENNY DREADFUL | While Paul lingered near death, Penny risked her own life to tell her father that she was leaving home to live with her lover and the other freaks. Dad’s horrific response? He brought in an “artist” to tattoo her face and fork her tongue! Naturally, when Paul saw what had been done to his girlfriend, he was horrified. “This is all my fault,” he cried. “What have I done?”

SEPARATION ANXIETY | After Bette went Eve Arden blonde and suggested that she and Dot were now like the perfect before and after picture, the brunette sib responded to Elsa’s offer to give her anything her heart desired by asking for the surgery that would make her a solo act. When Stanley suggested to Elsa that instead, perhaps “a mercy killing” was more in order, Elsa being Elsa, she was delighted. (Mind you, she didn’t seem to know that Ethel had overheard the incriminating conversation… )

OK, your turn. What did you think of the episode? Were you more surprised that Dell and Jimmy bonded or that Dell murdered Ma Petite? Hit the comments!