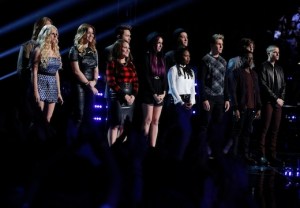 Your least favorite contestant on The Voice this season? You’re never getting rid of him (or her)!

As Carson Daly announced tonight, Season 7 of NBC’s reality singing sensation is adding a new twist: Every Top 12 contestant eliminated before the finals (fourth- through 12th-place, in other words) will be brought back for a last-chance performance, with viewers advancing their favorite into the last week of the competition as a fourth “Wild Card finalist.”

“It’s new, it’s exciting and it’s going down!” exclaimed Carson. I mean, with that kind of endorsement, I’m not going to question whether it’s a good idea, a bad idea, or one that I need another glass of sauv-blanc to ponder. I’m all in! Or as they say on Cougar Town, change approved!

Also new this season? Another week of guest advisors, including Miss Diana Ross — I’ll pause while you process that one — Patrick Stump from Fallout Boy and two artists whose names I will never spell correctly without the help of Google, Meghan Trainor and Colbie Caillat.

Have I stalled enough? Let’s get to the Top 12 results.

I wasn’t entirely sure who I wanted saved, but after his abysmal Duran Duran cover on Monday, I knew who wouldn’t be getting my vote.

I'm basing my #VoiceSave tonight on these last-chance performances (minus Ryan, of course). #SugarOrJessie #ThatIsTheQuestion

Last Chance Performances
Jessie: Sara Bareilles’ “Gravity” — A delicate, pretty performance that screeched like a car on two wheels on the big high notes. But otherwise… not bad! Grade: B
Sugar: Whitney Houston’s “I Wanna Dance With Somebody (Who Loves Me)” — A woeful song choice, delivered with loose, effortless power. Sugar’s tone, though, gets a little hinky at the top (a fact that seems to completely elude her coach, alas). Grade: B-
Ryan: Extreme’s “More Than Words” — I’ve had Nilla Wafers more exciting than this kid’s dreary power ballad cover. And at least a third of it wasn’t in tune. Feh! Grade: C-

Jessie’s slightly better last-chance performance trumped the fact that deep down, I felt like Sugar might be the more promising artist. And thus my Twitter campaign began.

It was all in vain, however, as America voted to #VoiceSave… Ryan Sill. Sugar fans, however, got a consolation prize when Pharrell repeatedly indicated he plans to hit the studio with her in a post-Voice environment. (Honestly, it’s that kind of committment the show needs to finally produce a viable, household-name-level pop star. Imagine what he could’ve done with Amanda Brown or Tessanne Chin? Damn.)

On that note, I turn things over to you. What did you think of Top 12 results? Did America get it right with the Bottom 3? Was the right artist saved? If not, what would you have done differently? Sound off in the comments!