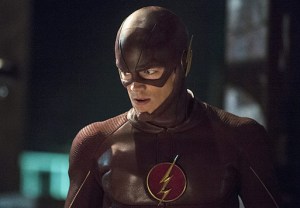 This week on The CW’s The Flash, Barry got rapped by some heavy metal punk, while Joe’s investigation into Nora Allen’s murder caught a certain someone’s attention.

First of all, thank you to the writers and Dr. Wells for the headline assist, though I’d like to think I would have arrived at “Man of Steel” myself. This week’s villain had the added wrinkle of being a grade school bully from Barry’s youth — a real Biff Tannen-like lunkhead, now metahumanized into a metallic menace. Of course, hailing from Barry’s youth, this Tony cretin eventually had to kidnap Iris, if only to implore her to give him as much ink as this “streak” fellow. But Barry, with some scientific assists from Caitlin and Cisco, found a way to deal a devastating blow, at a speed of Mach 1.1 after getting a five mile-plus running start (and apparently undeterred by the school’s closed doors. At least slip in one of those rubber door stops first).

Reconvening after her scare, Barry and Iris make nice with each other after their week-long spat, and during a convo about her rescuer, Barry inadvertently gives her an idea for the hero’s new moniker: The Flash.

The real tension in this episode, however, came from Joe West’s conversations with Dr. Wells, whose boffo brain the detective asked to pick in the name of figuring out who/what killed Nora Allen years ago, well before the S.T.A.R. Labs snafu gave birth to a bevy of freaks. Could there have been another particle accelerator that pre-dated S.T.A.R.. Labs? Hey, speaking of which, where was Dr. Wells before he materialized in Central City, a month after Nora’s murder?

That line of questioning quickly irks Wells — and you kinda felt for the guy, seeing as he was stoked about getting to be out of the lab to “go for drinks” with a bud. At Wells’ suggestion, Joe looks up the name Tess Morgan… aka the scientist’s onetime partner in both research and marriage, tragically killed in a car accident. Unable to continue on in their old digs, Wells put that sad past behind him and relocated, to Central City.

Or so he says.

Still, Joe hopes to still have the doc’s help, when possible, in investigating the impossible man who killed Nora. But that investigation may need to be put on hold, because at episode’s end Joe gets a visit from the “man in yellow,” who makes off with all of the case files and leaves behind a knife driven into a photo of Iris, with the scrawled message: “STOP OR ELSE.”

IN A FLASH:
* Cute device, having Iris’ blog entry echo Barry’s episode-opening narration.
* Foreshadowing alert! Iris hearing reports of a “guy who’s on fire but doesn’t burn up.”
* It’s gonna be one ugly (but wonderful) sweeps episode, someday, when S.T.A.R. Labs’ containment facility breaks open Ghostbusters-style — especially since even just one of them now knows The Flash’s true identity. Oy.
* “What exactly are we debating?” “The average number of bugs Barry swallows in a day of running.” “I look forward to seeing you accept your Nobel.”
* I alluded to this in TVLine’s most recent 20ish Questions column, but am gonna harp on it again here, so close your ears, comic book loyalists: If I am Iris, I at the very least am suspecting that the “streak” is Barry. Speech rhythms, metrosexual build, Barry’s MIA whereabouts when the “streak” shows…. That barely blurred, sometimes merely shadowed face and the speaking-into-an-oscillating fan voice is not completely fooling me. I know, Superman does it worse. And it’s some time-worn “convention” of the genre that the recognizable aren’t. I’m just saying that if you can try a little harder, why not do just that? Again, I’m sorry, but it takes me out of those scenes.

What did you think of “The Flash Is Born”?