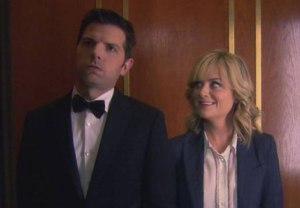 Parks and Recreation fans, we feel your pain. With several weeks still left before the NBC comedy debuts its seventh and final season, we’re ready to swear off waffles for life if it means the time will pass faster.

During a recent visit to the Parks set, where production on the series’ final two episodes had begun, Schur told TVLine he was dreading the show’s end.

“The real test will be the next couple of weeks, because that’s when we’re shooting the finale and we’ll start wrapping people out,” he said. “It’s going to be a huge bummer.”

But before we jump ahead to Parks‘ upcoming series ender — which Schur says was “very stressful” to write — we’ve got questions about where Season 7 will begin, given the three-year time jump that brought Pawnee into the year 2017 last April.

Below, Schur discusses which familiar faces will resurface in Season 7 (including Chris and Ann?!), the TV finales that influenced his writing and the “stages of grief” that have come with Parks‘ looming conclusion.

TVLINE | Knowing that you’re moving all these characters forward by three years, was it difficult to break story for Season 7?
It was actually quite easy. The idea behind that move was to give us a jolt of creativity. Now, we have this whole new idea. We don’t have to link everything to exactly what came before it. We can have the characters take quantum leaps and then fill in the blanks later, or not. It was actually really fun to mentally jump everybody three years forward in their lives and imagine what was going on. I hope that translates, because it was very enjoyable. It was like a fun creative writing exercise.

TVLINE | Can we expect to see Rashida Jones and Rob Lowe back?
We made a list of people that we needed to see back one more time. We didn’t get everybody we wanted, because some people had other obligations. But a lot of the people we were hoping to see one more time — we managed to make that happen.

TVLINE | What was the mood like when you wrote the series finale? Did you feel pressured to create the perfect end for these characters?
It’s been very stressful. We watched a lot of finales of other shows in our writers’ room. We’d have lunch and watch the Cheers finale, the Six Feet Under finale. And we realized there’s no such thing as a perfect finale, but the ones that were the most satisfying are the ones where you spent time with the characters and luxuriated with them and ones where you felt like, at the end of it, you could imagine what happens next. TV is a weird thing. People are growing with you over many, many years. And the best finales are ones where you can imagine the characters continuing to move on with their lives. That became our goal: Let’s do a nice, character-based story where, at the end of it, you’re like, “OK, I feel like everyone is safe and happy.” [Laughs]

TVLINE | What’s the atmosphere been like on set for these final episodes?
It’s been exactly what you’d imagine. A little bit exciting, a little bit sad, a little bit of people freaking out — all the stages of grief at once. The show takes its cues from its lead actress and main character. We’re all trying to Leslie Knope our way through it: Keep our chins up and soldier on.

Parks fans, what’s your biggest wish for Season 7? Hit the comments and tell us!