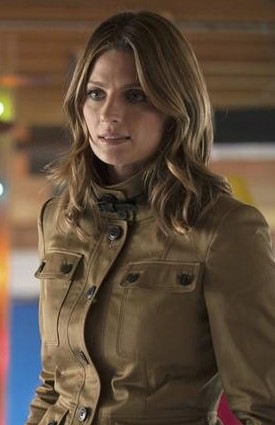 Castle‘s seventh season already has proven to be a landmark one, in that Rick and Kate finally (finally) tied the knot. But this cycle could also make its mark in other ways, as leads Nathan Fillion and Stana Katic will have to make a decision about their future with the trusty ABC procedural.

Here in Part 2 of my sit-down with Katic, she previews the ersatz Caskett honeymoon to come (airing tonight at 10/9c), sings the praises of a showcase for a fellow cast member and ponders the possibility of Season 8 (and beyond).

TVLINE | In lieu of a proper honeymoon, Kate and Rick will find themselves undercover at an Old West-style resort. Corsets notwithstanding, was shooting that episode a blast?
Yeah, that was fun. I got to learn a little bit of gun slinging; in fact, I sat there at the end of it and said, “Oh, I think I could do this, like for a living. Gun slinging. For sure.” I worked with a guy who taught the guys for 3:10 to Yuma and a bunch of other wonderful gun slinging scenes in film history, so it was fun to be able to go and play in that world. 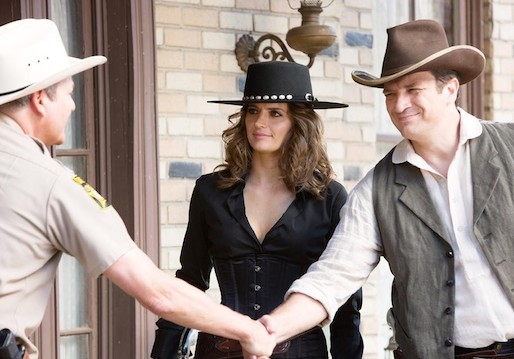 We shot in the Universal back lot and there were a lot of reenactors, too, doing the background work. We were riding around in a wagon…. It was just fun.

TVLINE | I asked [showrunner] David Amann if there was a “badass Beckett” moment coming up — because I always get readers asking if there’s a badass Beckett moment coming up — and he said there’s one at the end of the Old West episode. At least one of my readers assumed he was talking about Kate lassoing Rick, or is it something else?
No. He’s talking about something else.

TVLINE | Between the Old West episode, “The Taking of Espo 1-2-3” as David calls it (aka the subway hostage episode “Kill Switch,” airing Nov. 24), the action-movie star episode (Dec. 1) and the Christmas episode (Dec. 8), do you have a favorite out of the upcoming four?
Well, I like the Espo one because I like the fact that one of my coworkers gets to shine like that, because those guys are super-talented, Jon [Huertas] and Seamus [Dever]. All of the cast is incredible, but those guys, when they get a chance to kind of get down and dirty, they love it, and they’re so creative.

TVLINE | I’m excited to see the subway episode because I get a Die Hard feeling from the logline, Espo almost as a lone wolf.
Yeah. He’s funny, too, because Jon does a Denzel [Washington] imitation sometimes. Sometimes we’ll be like, “OK, do this take as Denzel,” and he’ll throw in a little touch, and that’s what that episode kind of reminded me of, a Denzel movie. I don’t know if he went “full Denzel” in any point, but it was fun.

TVLINE | David Amann also said that the Christmas episode ends with some sort of a cliffhanger…?
Oh yeah. Yeah. Do you know what it is?

TVLINE | No. But can you give a flavor for it without spoiling it?
It’s going to change the shape of the show for a few episodes, that much I can promise you.

TVLINE | Interesting. I saw you cover the “baby topic” on Good Morning America, so I assume that’s not the cliffhanger. It’s not an EPT test or anything.
No. No.

TVLINE | Your and Nathan’s contracts are up at the end of this season. When does this decision-making process begin? Is it now? Is it not now? Is it spring…?
I don’t know. I really don’t know.

TVLINE | Is it not something that occupies your brain space right away, but your representatives’? How does that work?
I feel like there are a lot of things that other people have to decide before I really have to decide — do you know what I mean? So, I’m not first in line for having to worry about that. I think that there are conversations probably on some other level, but I don’t know exactly what yet, because I haven’t had any conversations personally.

TVLINE | When the ball is put in your court, what sort of considerations does Stana Katic have about Castle Season 8 and beyond?
Well, I think it really depends on…. I don’t think that a show should overstay its welcome.

TVLINE | Castle has told a pretty complete story at this point, one could argue.
If the character is complete, if there is nowhere else to go creatively, then I think it’s better to stop when you’re on top, because I admire the way that they did that with The Wire, you know? Tell a great story and then go home and move onto something else. Don’t milk it “just because.” So for me it’s about art over finance, and as long as we’re creating something that is compelling and that has somewhere to go, then we’re good to go. And when we find that we’re not, when we don’t have anywhere else to go, then it’s time for everyone to pack up and move onto the next thing. But I don’t know where it’s going to end.