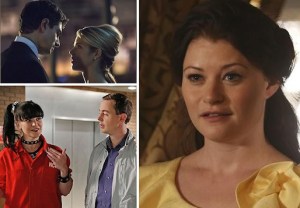 Will Once Upon a Time‘s beauty play hero? Which NCIS agents will have a heart-to-heart? Who knows The Mentalist‘s secret? Is an Arrow kiss just a kiss? Read on for answers to those questions plus teases from other shows.

Any scoop on Once Upon a Time’s Belle? –Natalie
With husband Rumplestiltskin treading ever deeper into morally murky waters, series cocreator Adam Horowitz says that Belle’s “strength and heroism play a key part in the fall finale” airing Dec. 14. The EP also says to expect a flashback to “another bit of her time in the dark castle with Rumple.”

Sean Murray of NCIS tweeted that fans would find out why McGee is acting like he isn’t over Abby, if he still loves her. Can you confirm what episode this will be touched on? —Robert
I can confirm that Murray was alluding to this Tuesday‘s episode (CBS, 8.7c), in which McAbby have what I am told is “a very personal conversation.”

I know that pictures from the new season of The Mentalist have surfaced, but I need more. Like, how does Cho and the rest of the team respond to the Jane/Lisbon relationship? –Alyssa
Cho of all people, as you can imagine, is not quick to pick up on the consummated romance, in part because they endeavor to keep it under wraps. But that’s not to say a different colleague doesn’t find them out pretty much ASAP. (P.S. Did you know that Agent Fisher is a goner? I admittedly did not.)

I thought I saw a preview showing The Mentalist‘s Lisbon and Jane in what appeared to be the beginning of a hot and heavy love scene. It was billed as a continuation of the kiss at the end of Season 6. Now I can’t find it. Was I right? –Charlotte
There is no continuation, “hot and heavy” or otherwise, of the season-ending kiss — though “Jisbon” fans should be plenty satisfied with the conversation topic  (namely, a question that is raised) in their first season premiere scene. (Granted, that joy could be tempered by a question Pike poses to Jane later on…..)

Do you have any scoop 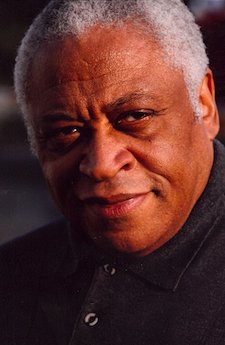 on Season 2 of The Strain? –lilslim
In addition to the recurring role of the crisis-bungling NYC mayor (to be played by West Wing alum Ron Canada, right), the FX drama is looking to add a series regular in the form of David, an 11-year-old boy who, as the strain spreads, must make a very difficult decision regarding his parents.

Anything on Grey’s Anatomy’s final two fall episodes? —Jennifer
Amelia doesn’t exactly follow through on her threat to move out of Casa de Mer/Der in the wake of her brother’s near-betrayal. As Caterina Scorsone teased to Michael Ausiello, “She’s still lingering in the house a little bit” in this Thursday’s episode. “She knows he’s sorry, and she knows that he’s really struggling. One of the things Amelia’s demons have given her is a deep well of compassion.” Having said that, the fact that Derek waffled on whether to go to bat for his kid sis “fundamentally changes the way Amelia sees him, and the way she sees the dynamic of their relationship. She can forgive but she won’t forget.”

What can you tell us about the NCIS: Los Angeles episode “Spiral”?  –Jackie
This season’s ninth episode finds Callen working undercover in the mail room of an office building when the place is over taken by terrorists. An added wrinkle: When the rest of the team rides to the rescue, they discover the entire building is wired to blow. Where’s John McClane when you need him?

Arrow’s Olicity fans are anxiously awaiting the episode this week and would love for you to put their minds at ease, especially after seeing some of the promo pics of the Raylicity kiss and date. Do we have something to be worried about? –Mac
I’m sure one of y’all can spin this soundbite in a positive way: When we asked EP Greg Berlanti what Felicity is feeling during that apparent smooch, he said, “There’s nothing that she’s ever going to feel that isn’t going to be somewhat informed by her feelings for Oliver. You watched her kiss Barry [in The Flash Episode 4]. It doesn’t mean that she doesn’t have feelings for [Barry]; they’re just different kinds of feelings.”

I love Diggle on Arrow, and David Ramsey is so great with facial expressions and one-liners. Do you have any scoop? –Marika
Be careful what you wish for, Marika. When I spoke to showrunner Marc Guggenheim the other day, 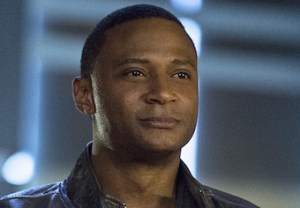 he said that Ramsey had “just shot what I would describe as his most emotional scene, for Episode 10. It’s a terrific scene between him and Laurel, and David breaks your heart with his performance.” In the more immediate future, Guggenheim said, “We’ll be seeing Lyla again at the end of Episode 7, and there’s a pretty big development for Diggle and Lyla in Episode 8, the second part of the Flash crossover.”

Do you know when we’ll see Nyssa again on Arrow? Love her character! –Caitlin
“It’d be hard to tell [the Ra’s al Ghul] story without telling more of Nyssa’s story,” Greg Berlanti notes, and as such “there’ll be a lot more of both” characters as Season 3 continues. In fact, it appears Arrow will even flash back to Young Nyssa (they’re casting for age 9 to 12), as it is revealed that she picked up on her mad skillz at an early age.

Do you know if we’ll be able to watch the rest of the Selfie episodes somewhere now that it’s been pulled from ABC’s schedule? –Rebecca
There are no showings slated for the next several weeks (as ABC fills Tuesday’s problematic 8 o’clock hour with Shark Tank repeats, holiday specials and what not), and an ABC rep had no word on when or how the remaining unaired episodes might be available for consumption.

Anything on Person Of Interest’s Root and Shaw? They haven’t gone on a mission together in a while. —Justin
In the Nov. 25 episode, Root and Shaw will disagree on how to handle a new threat sprung by Samaritan – and when I pressed Sarah Shahi for details, what she remembered most was the episode featuring “a lot of chicks on bikes.” So there’s that.