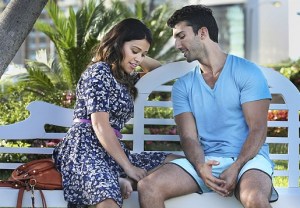 The Team Michael vs. Team Rafael debate on Jane the Virgin is going to get muy caliente on Monday’s episode (The CW, 9/8c) – and not just because the latter candidate gets shirtless.

Now that Jane knows her fiancé Michael has been keeping some crucial information about Petra from her – and to a degree, Rafael – heartbreak seems to be in store for the couple.

“She’s put a hold on Michael, and she’s got some serious things to think about,” star Gina Rodriguez tells TVLine during a recent set visit. “Going into a marriage, having a lie that can be so detrimental to her future, is something I wouldn’t want to get into either. You’re going to really see Jane having to think about what she’s going to do and if that’s the journey she wants to go on.”

Meanwhile, Rafael is acting on his newfound feelings for his baby mama in a “really careful” way, Justin Baldoni insists.

“He’s trying to make a decision from a place of what’s best for everybody,” the actor explains. “One of the side effects of cancer is he really cares about other people’s feelings and he holds back a lot. He doesn’t want to ruin this relationship with the woman who is going to have his child, so he’s trying to handle it very delicately. It’s tricky all around with Petra and Michael [in the mix] too, but at some point, he’s going to have to make a decision not just for everybody else but for himself.”

Not to mention, Rafael might not be all that selfless. As Rodriguez notes, “[he] never seems to have held back in the past” with regards to what he wants. So with Jane and Michael having issues, “you can imagine in ‘Chapter Six,’ maybe he won’t hold back either with Jane.”

Read on for scoop on an epic encounter, Petra’s wicked ways and Rogelio’s evil stepdaughters:

THE FIRST TIME | No, we’re not talking about when Jane loses her virginity, but her meet-cute with Michael, which viewers will get a glimpse of on Monday. “To me, it’s the best interaction of two people and how they could have met,” Rodriguez previews. “You want to talk about love at first sight? What a fun love at first sight! … I love Michael. I feel for him so much. At first, people were so Team Rafael because he’s goodlooking. I think that was everybody’s initial draw. But Michael’s so endearing. He’s so gentle. He’s so sweet. You’re going to see why she was smitten over him.”

MARITAL DISPUTE | Rafael isn’t going to take Petra’s betrayal without putting up a fight. The fact that she pretends he hit her “shocks him and it hurts him,” Baldoni reveals. “But it’s just another thing [to deal with], and she doesn’t win. He doesn’t let her because he’s really focused on the one thing that is the most important, which is Jane and the baby.” 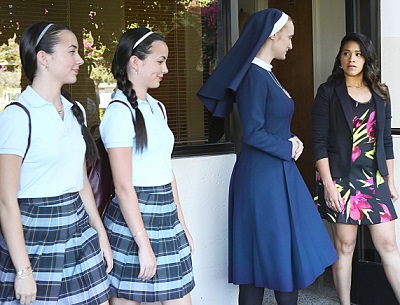 BREAKING BREAD WITH DEVILS | Get ready for the world’s most uncomfortable dinner when Jane, her mother Xo and grandma Alba get together for a meal with Rogelio’s “evil, evil, evil” stepdaughters. “You can imagine how that turns out,” Jaime Camil, who plays the telenovela star, says with a laugh. Adds Andrea Navedo: “Xo is not happy at all. She’s on her best behavior for Jane.” As for Rogelio’s evil step-spawn, Navedo raves that the girls “steal” the episode as they torture Jane. But they won’t be victorious this round. “[Jane] ends up schooling them in a really good way, thanks to me,” Navedo teases. “She definitely does teach them a lesson.” And her plot against the teens includes Rafael taking off his shirt. We’re all for those kind of after-school lessons!