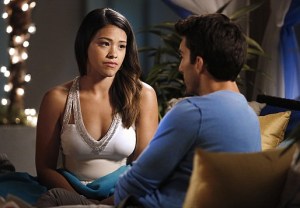 Warning: The following contains spoilers from Monday’s episode of Jane the Virgin.

On Monday night’s Jane the Virgin, the titular heroine broke one man’s heart while giving another hope for the future.

The hour began with an adorable, hilarious flashback to how Jane and Michael met. But by the episode’s end, the two were done, with Jane ending their engagement because of his lies, and more importantly, because something had changed. That something? Rafael declaring his feelings for her, leading to an epic, telenovela-style kiss.

“When I first left Michael on the show, I was literally devastated, as Gina the actress,” star Gina Rodriguez tells TVLine during a recent set visit.

Given that Jane was with Michael for two years and on the cusp of marrying him, the sudden pull toward Rafael “didn’t feel right,” the actress says. “I felt icky. It seemed too fast, because it was. So it was good that what Jane was going through, I was feeling as well. I wasn’t as comfortable, and now I’m very comfortable.” And as the series further explores the Jane-Rafael connection, “it’s been really fun working with Justin [Baldoni, who plays Rafael] in that capacity.”

As for Jane’s quick change of heart: “It gets addressed [on the show], and that’s what’s good,” she adds.

The other point in the love triangle, Justin Baldoni, also was surprised by the speedy transition from Michael to Rafael, but he felt the baby daddy’s declaration of his feelings was “a really beautiful moment” for his character.

“Rafael doesn’t make a lot of selfish decisions anymore,” the actor explains. “Everything he does is for other people, even when he didn’t tell Jane about his sister and the hotel and how he could lose it. Everything is from this place of like, ‘OK, what’s best for that person?’ This is a chance that he gets to make a decision for himself.”

In pursuing Jane, the wealthy ex-playboy has an opportunity to leave behind the materialistic society in which he’s grown up. “Jane represents something new for Raphael in a way that no one else ever has, and that is an escape from this world,” Baldoni describes. “Everyone treats him differently because he’s the boss and he has all this money and he comes from this family, and Jane doesn’t care about any of that stuff. He has a chance to be himself and to forget about all of these things just for a second.”

Even though Jane isn’t interested in Rafael’s riches — somewhere, a Solano lawyer scoffs — there are still “a lot of obstacles” standing in the way of their potential romance, Baldoni warns. For starters, there’s Michael, who’s still very much in the picture since he’s heading up an investigation at Rafael’s hotel. Those three characters mixing in the same space is “awkward and it’s strange, but [it’s] the way it should be in real life,” Rodriguez says. “It is wrong, and it feels nasty at times” to throw her growing relationship with Raf in her ex-beau’s face so soon after their break-up. “You’re going to see Jane go through the experience of, ‘This isn’t fair to Michael. I wouldn’t want this done to me. So do I still continue to feel and allow myself to feel?'” 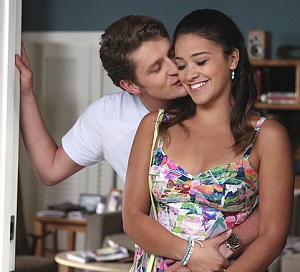 Meanwhile, Jane’s mother Xo doesn’t think her daughter is being her usual, sensible self; it’s also worth mentioning that she’s grown to love Michael, which may work in his favor should he decide to fight for Jane.

“I think there’s always hope, for sure,” Brett Dier says of the former couple’s future. “They have a strong connection, and he has a strong connection with the family, too, not just Jane. So you’ll definitely see him in her life again at some point. But I’m not saying that they’ll be together.”

But does the show’s leading lady think her romantically torn alter ego will give Michael another chance?

“Jane’s desire to be truthful and honest and good to people makes her make decisions that would seem finite, but in all reality, when truths start to appear and we understand more about a person, we understand we make mistakes,” Rodriguez replies. “And Jane… makes mistakes. So as much as she likes to say, ‘Michael, it’s done here,’ because she doesn’t want to lead anyone on, we all make mistakes. It’s going to be interesting to see if she catches that.”