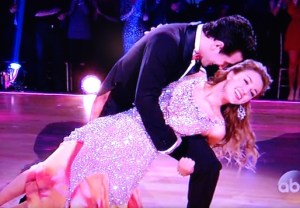 A number of intriguing questions lingered going into Week 10 – beyond the usual, “Whaaaa? The semi-finals are already here?” – of Dancing With the Stars: Would a rumored groin injury be the downfall of one of Season 19’s shiniest stars, Alfonso Ribeiro? Could 76-year-old Tommy Chong continue to defy the odds, the judges and his own ballroom limitations to escape elimination yet again? Might the remaining trio of fierce and fabulous females — Sadie Robertson, Janel Parrish, and Bethany Mota – reach next week’s finale?

With the Mirrorball trophy so tantalizingly close, tonight’s live show required our celebs to perform two dances, to “Plugged/Unplugged” versions of the same song, while special guests such as The Voice finalist Christina Grimmie and You Tube sensation Noah Guthrie added musical sparkle to the festivities.

DANCE OF THE NIGHT:  Janel Parrish and pro Val Chmerkovskiy: In a dramatic, delicious Paso Doble that was pure perfection, Janel let us all know she was not content with second-best. Carrie Ann Inaba was downright ecstatic, screaming, “That was over way too soon, it was so dynamic, so dramatic!” while Julianne Hough praised the perfectly synced performance, saying, “You guys were one, there was no separation.” Len Goodman was downright giddy, calling it a “fabulous routine” while Bruno Tonioli hailed the duo as “an untamed force of nature… you really set the stage on fire!” Did I already mention it got nothing but 10s?

RUNNER-UP DANCE OF THE NIGHT: Bethany Mota and pro Derek Hough: With a contemporary dance choreographed beautifully around a lone white picture frame, Bethany wow-wow-wowed the judges.  “This dance should be on permanent display in an art gallery,” gushed Bruno, “it’s a modern masterpiece.” Len dubbed it “a Picasso of a dance,” but Julianne went for the most obvious metaphor: “It was picture-perfect.” To no one’s surprise, the dance earned a quad of perfect 10s, too.

MOST CRIMINALLY UNDERSCORED: This is the semi-finals, and while the judges may occasionally over-score (Tommy’s OK rumba got two 9s), no one got any overly pitiful paddles tonight.

WORST OF THE NIGHT: Tommy Chong and pro Peta Meurgatroyd: Despite an inspired musical choice (’80s classic “Tainted Love”), Tommy’s opening jazz dance did little to dispel his recurring role as DWTS’s most beloved charity case. While politeness abounded from Julianne (“You are the wildcard…and that was wild!”) and Carrie Ann (“Peta, you are the hardest working woman in show business…you’ve made Tommy like the most valuable player.”), it was Bruno’s matter-of-fact praise of Peta that perhaps said it best: “She can bring the dead back to life!” The dance earned a string of generous 7s from the judges.

And now for the results…

“I just showed that old stoners can perform when they need to,” said a gracious Tommy of his DWTS experience, after receiving a standing ovation from the ballroom.