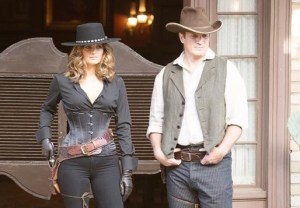 This week on ABC’s Castle, newlyweds Rick and Kate escaped the furled brows of those not invited to their impetuous wedding by making tracks for an Old West resort, to investigate a murder. When all was said and done, did their “so not a honeymoon” leave you satisfied?

THE CASE | ‎ I wasn’t a fan of this case, in part because I felt like the added layer of NYC-based relations — Phillip Dagmar and his wife — needlessly muddled the story. I’m typically game for the occasional “treasure hunt” motive, but this “Partner 3 covered for Partner 2’s murder of Partner 1” stuff… zzzz. I’d rather have seen a conspiracy among the larger resort staff. And while the resort boss turning out to be the killer was a bit obvious, having silhouetted Kate save the day with a quick draw from just inside the saloon’s swinging doors was a nice atmospheric touch, punctuated by her gun twirl. (Yes, that was the badass Beckett moment.)

THE CASKETT | Cold opens such as this episode’s are the kind that make you entertain the (impossible) idea that TPTB read comments or “message boards” and course-correct accordingly, seeing as Ryan, Esposito and Lanie were as cheesed off by the perceived wedded dis as many suggested they absolutely should be. (“You suck” is how Espo succinctly put it.) Still, I think many would agree that there was much more storyline “gold” to be mined in their hurt feelings (and mourning of missed carbs!) than had they been neatly tucked into the background of last week’s “Hamptons” nuptials. This approach even slipped Gates into the spotlight for a brief moment, as she counseled RySpo to stop licking their wounds and do something positive — like, you know, donate some days off to the honeymoon cause.

‎As for Caskett themselves, the campfire scene was heading in a very nice direction before being cut short by the rattlesnake — but for once can we have a brazen, bedroom-eyed Beckett not turn Rick into a flustered, fumbling-whatever-he-has-in-his-hands schoolboy? (Wasn’t this guy a smooth playa back in the day?) Somewhat making up for it all was the pleasingly playful closing scene, in which Beckett bought into the Old West honeymoon notion (for now). Also, bullet wound scar! And no green screen!!!

THE QUIPS
* “I hate to say this but… your husband may be right.”
* “This is like three fantasies coming true all at once.”
* “I like my coffee like I like my men — strong, black and bitter‎.”
* “That’s why we don’t approach this like cops, we approach it like writers.” “We procrastinate and make stuff up…?”
* “What do you all call whiskey here?” “Whiskey‎.”
* [Rick to the horses] “Esposito, Ryan — yee-haw!”
* “Cornelius and Percy Pea…. cock.‎”
* “If I survive this, I’m giving this place a scathing review on Yelp.”
* “We’re probably the reason they fell in love in the first place.” (Keep telling yourself that, boys.)

What did you think of “Once Upon a Time in the West”?