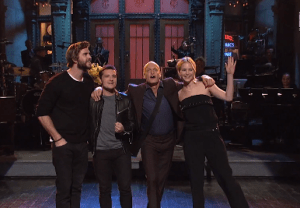 After yet another limp, politics-driven cold open, it seemed like Saturday Night Live was going to need a display of super-heroics to avoid catastrophe.

Thankfully, the show got exactly what it needed when Woody Harrelson — along with a trio of costars from The Hunger Games: Mockingjay — Part 1, Jennifer Lawrence, Liam Hemsworth and Josh Hutcherson — arrived on the scene for a loose, goofy monologue that previewed a rock-solid episode punctuated by several excellent sketches.

Below are my picks for the week’s best and worst:

BEST: New Marijuana Laws
All three of the episode’s pre-taped bits had moments of hilarity, but this montage of joyous potheads learning they could now carry up to 25 grams of weed in public without fear of arrest had the sharpest execution — from Leslie Jones running her smoke-filled car into a curb and then rejoicing “de Blasio, baby!” to Harrelson’s dreadlocked dude sadly contemplating his bong after learning he couldn’t actually inhale in the streets. The winner by a nose over “Young Tarts & Old Farts” and the sharp-eyed, Twitter-twisted sitcom The Dudleys for the top slot.

BEST: Last Call
We’ve seen Kate McKinnon’s sloppy barhound before, but the addition of a square foot of saran wrap — “I’ve been breached!” — and a brilliant extended comparison of her character to a dead leaf definitely took this hilarious grotesquerie to new hilarious/uncomfortable heights.

HONORABLE MENTION: Leslie Jones on “Weekend Update”
What happens when SNL‘s relationship expert comes to the defense of a woman who made headlines for getting stuck in her internet date’s chimney? A very edgy, occasionally raunchy rant about the impossibility of modern men and what they do to the female brain — complete with comparisons of penis types to the seven dwarfs, and this instant classic rant: “We’ve got to put our hands on your sweaty, hairy ass — and you can’t even call me back tomorrow?!”

WORST: Nostalgia for Crack
Harrelson committed to this setup about a group of guys at a bar pining for New York City’s good old days, but the punch lines never took the premise past the initial shock of “Whoa! One of these dudes is a crack addict!” There may have been a solid sketch trapped underneath the predictable writing, but the envelope remained unpushed when it was all said and done.

WORST: “Apples”
This bit featured Harrelson as a guy singing an unrecognizable ditty to his friends around a camp fire. Too bad Lorne Michaels didn’t use the cue cards for this interminable sketch as kindling for the aforementioned blaze.

What did you think of Harrelson’s installment of SNL? Take our poll below, then sound off in the comments!